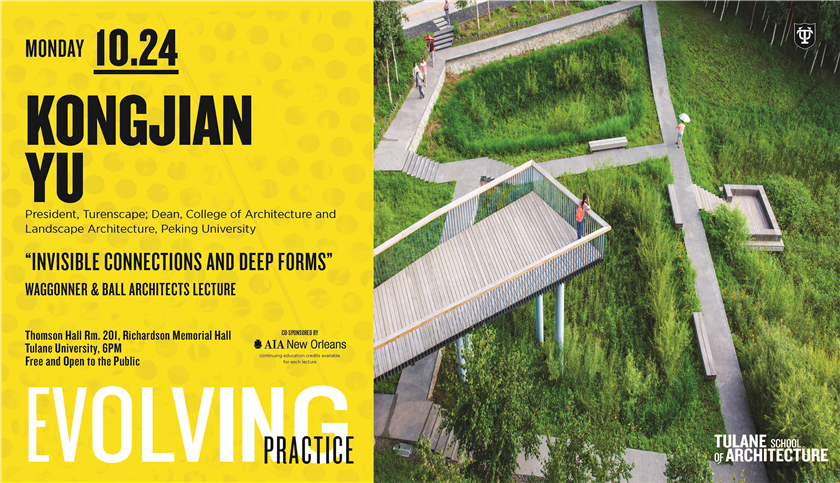 A reception will be held prior to the lecture in the Favrot Lobby at 5pm. The lecture will begin at 6pm. This event is free and open to the public. AIA credits will be offered for this lecture.

Kongjian Yu is founder and dean of the College of Architecture and Landscape at Peking University. In addition, he is the founder and president of Turenscape, one of the first and largest private architecture and landscape architecture firms in China. His practice includes landscape and urbanism in major cities around the world. Professor Yu’s numerous awards include 11 ASLA Excellence and Honor Awards and a 2009 Urban Land Institute Global Award, and 4 World Best Landscape of the Year Award (World Architecture Festival). His guiding design principles are the appreciation of the ordinary and a deep embracing of nature, even in its potentially destructive aspects, such as floods. Yu is a fellow of American Society of Landscape Architects, and was elected member of the American Academy of Arts and Sciences in 2016. He has a Ph.D. in design from the Harvard Graduate School of Design.

People might think that our world is more connected mentally and physically than ever, with Facebook and WeChat on the one hand, and ubiquitous highways and pipelines on the other. But actually it is totally opposite. We have created a connected world, but such connections are false or fake: the landscape matrix and its invisible processes are fragmented and disconnected, more than ever. The true movement or cycles of water, nutrients, food, energy, species and people are broken or disconnected. The invisibly interconnected relationship between air, water, soil, nutrient, species and people are more than ever been harmfully interrupted. The single-minded solution of “connecting” and the fake “connection” is actually the murder of those invisible connections.

Using a number recent projects at Turenscape, Kongjian Yu will discuss the solutions to urban water issues and other interconnected issues such as nutrients recycle, food production, and biodiversity conservation that are symbiotic and ecologically based. Ecological infrastructures, working across the scales, which reconnect and reweave the invisible processes and cycles, is considered as an alternative to single-minded grey infrastructures of connectivity. Here, ‘interconnection’ is always the keyword, but such true connections may not be easily visible, yet they create deep forms.