CAMBRIDGE, Mass., Oct. 8, 2016 – The American Academy of Arts and Sciences has inducted its newest class of members. One of the nation's oldest learned societies and independent research centers, the Academy includes among this year's new members prominent scientists, artists, literary figures, and leaders of academic, business, philanthropic, and cultural institutions from across the United States and around the world.

Members of the 2016 class include winners of the Fields Medal, the Wolf Prize, the Pulitzer Prize, the National Book Award, the Grammy Award, and MacArthur, Guggenheim, and Fulbright Fellowships. 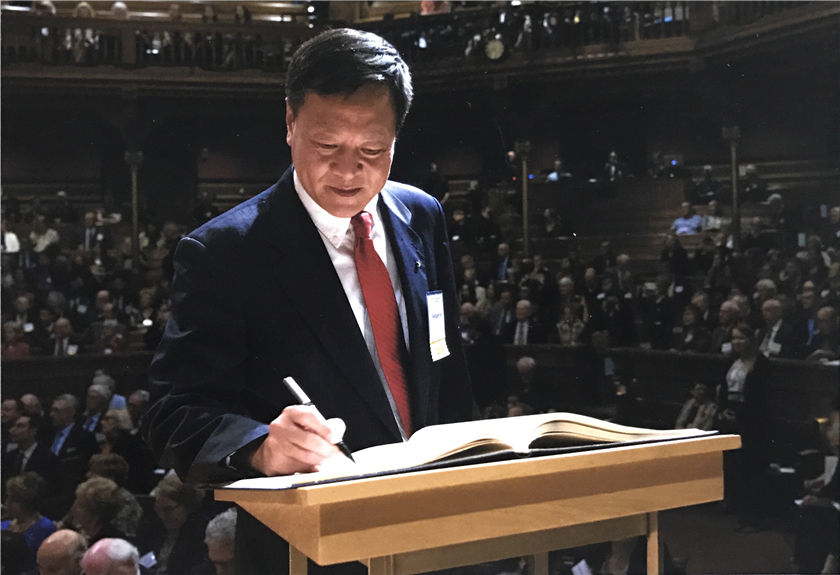 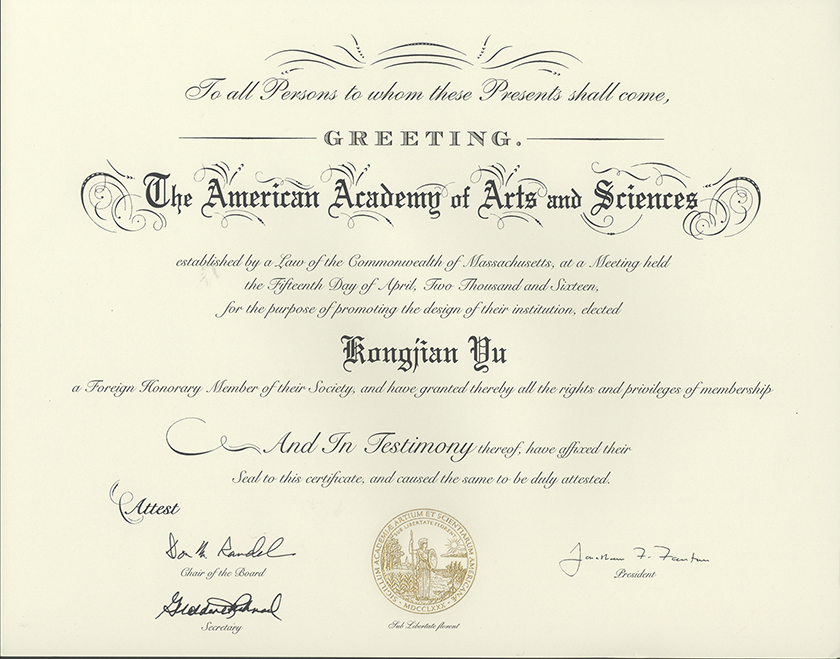 The Induction Ceremony included a reading of the letters of John and Abigail Adams by new members MIT Corporation Chair Robert Millard and President of Ariel Investments Mellody L. Hobson as well as remarks by five new members, representing the five classes of the Academy: geochemist and Columbia University professor Terry A. Plank; University of California, Berkeley professor of chemical and biomolecular engineering Jay D. Keasling; MIT professor of political science Andrea Louise Campbell; artist and professor of visual art at the University of Chicago Theaster Gates, Jr.; and President and CEO of The Aspen Institute Walter Isaacson.

“This weekend the Academy formally welcomes into its membership a group of esteemed leaders from across the nation and the world,” said Don Randel, Chair of the Academy’s Board of Directors. “We are honored to include these new members, who have demonstrated both excellence in their fields and a commitment to serving society.”

The weekend concludes with a presentation by Temple Grandin, world-renowned autism spokesperson and professor of animal science at Colorado State University, on educating students who have different kinds of minds.

“We look forward to the participation of the new members in the work of the Academy—work that is intended to advance the common good,” added Academy President Jonathan F. Fanton. “Our new members will join in the Academy’s long tradition of collaborating across disciplines on research projects and other initiatives that illuminate the pressing issues of our times.”

Among the 164 new Fellows are:

Melanie S. Sanford of the University of Michigan, whose research is at the interface of organic and inorganic chemistry.

Terry A. Plank, geochemist, volcanist, and professor of earth sciences at Columbia University and the Lamont Doherty Earth Observatory.

Temple Grandin, professor of animal science at Colorado State University and a world-renowned expert in human animal handling as well as a global advocate for autism awareness.

Jeffrey A. Dean, Google Senior Fellow in Systems and Infrastructure, who has made field changing contributions by developing new approaches to large-scale systems for distributed computing.

Andrea Campbell, MIT professor of political science, whose work has opened new frontiers in the study of the ways in which public policies influence mass political attitudes and behaviors—including how Social Security changed the attitudes, voting, and contacting behaviors of elderly U.S. citizens.

Jay Keasling, professor of chemical engineering and bioengineering at the University of California, Berkeley and chief executive officer of the Joint BioEnergy Institute, who engineers microorganisms to synthesize hydrocarbon biofuels with properties identical to those of petroleum-based fuels.

Theaster Gates, Jr., installation artist and professor of visual arts at the University of Chicago, whose work includes the Dorchester Projects on the South Side of Chicago that restored dilapidated buildings and turned them into cultural institutions with artifacts from the South Side.

Robert Millard, chairman of the MIT Corporation, who in that capacity chairs the Corporation meetings and the Executive, Membership, and Development Committees as well as presides over MIT's Visiting Committees.

Walter Isaacson, President and CEO of The Aspen Institute, known for the exploration of issues and ideas in education, communication, philosophy, education, and defense and security.

Mellody L. Hobson, President of Ariel Investments, Chair of the Board of Directors of DreamWorks Animation, and a nationally recognized voice on financial literacy and investor education.

Edythe Broad, lifelong philanthropist of the Eli and Edythe Broad Foundation, who has advanced causes in education, scientific and medical research, the arts, and civic endeavors in Los Angeles. With her husband, Eli Broad, she built and endowed The Broad, a new contemporary art museum in Los Angeles that opened in September 2015.

Among the 21 new foreign honorary members are:

Louise Richardson, vice chancellor of the University of Oxford, who helped to reshape and modernize Scottish higher education at the University of St Andrews, where she was the first woman to lead a university in Scotland.

Eavan Boland of Stanford University and one of the foremost female voices in Irish literature; and Chunli Bai, president of the Chinese Academy of Sciences, whose achievements include the development of new technologies and methodologies for use in molecular and materials sciences.

About the American Academy of Arts & Sciences

Founded in 1780, the American Academy of Arts and Sciences is among the nation’s oldest learned societies and independent policy research centers, convening leaders from the academic, business, and government sectors to respond to the challenges facing the nation and the world. In its work, the Academy focuses on higher education, the humanities, and the arts; science and technology policy; global security and international affairs; and American institutions and the public good. Academy research has resulted in reports such as The Heart of the Matter, Restoring the Foundation: The Vital Role of Research in Preserving the American Dream, Public Research Universities—Recommitting to Lincoln’s Vision: An Educational Compact for the 21st Century, and A Primer on the College Student Journey. The Academy’s work is advanced by its approximately 4,800 elected members and 600 foreign honorary members, who are leaders in the academic disciplines, the arts, business, and public affairs from around the world.