In mid-July, floodwater submerged the city of Zhengzhou, in China’s central Henan province. A year’s worth of rain poured down on the city streets over just three days. The cloudburst overwhelmed Zhengzhou’s flood defenses, washed away cars, swamped ground-floor shops, and inundated the subway transit line. Over 300 people died in the deluge.

This in a city of 10 million that is supposed to be a model for floodwater management.

Since 2016, Zhengzhou has invested over $80 million to redesign itself as a so-called sponge city—an urban planning concept promoted by Chinese President Xi Jinping that advocates for creating green space to absorb and mitigate floodwater. The central government has spent $14 billion on sponge city concepts across China since 2014 and plans to convert 80% of urban areas to sponge by 2030.

In the wake of Zhengzhou’s floods, critics say the concept has been a waste of money. But advocates say the city simply hadn’t spent enoug —and that the effects of climate change mean Zhengzhou, like all cities, will have to spend a lot more.

Classic city scapes rely on cement sewer systems to keep the streets dry. Concrete sidewalks and asphalt roads channel rainwater into gutters cut beneath the side of the streets, where the runoff flows into sewer pipes and is, eventually, disposed of at sea. Yu Kongjian, a professor of landscape architecture at Peking University, calls this type of management system “gray infrastructure.”

“Gray infrastructure is built to fight against water. It seeks to drain the water away as quickly as possible and not accommodate it at all,” says Yu. That need for speed becomes an issue when rainfall is too heavy. The rushing water turns designated drainage points into bottlenecks. 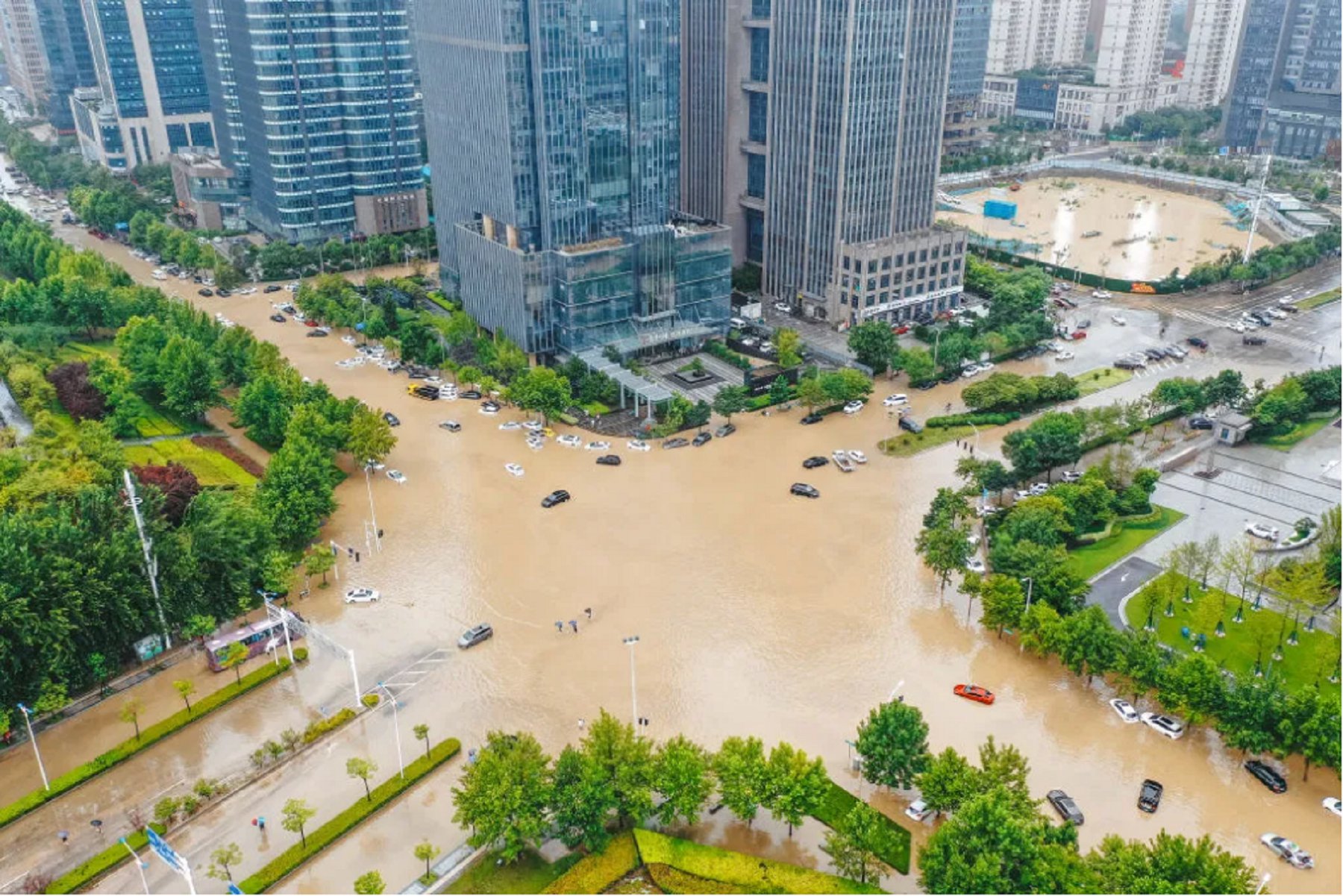 Floods inundated roads in Zhengzhou, capital of Henan province, where greenery is raised above the street.

Sponge cities, which deploy features Yu calls “green infrastructure,” are designed to do the opposite of traditional “gray” planning. Parks, ponds, wetlands, and rivers—all tenets of green infrastructure—are built to “slow water down, retain rain where it falls, and make water flow gentler.”

In the U.S., the same idea is often called “low-impact development.” In an ideal system, green and gray infrastructure are integrated, creating opportunities to store and reuse rainwater for flushing systems or for irrigation.

But sponge cities have limits. The guiding principle of slowing the flow and drainage of water means water will accumulate if rain falls too quickly—as it did in Zhengzhou. Hu Caihong, a hydrologist at Zhengzhou University, told Science that the city’s water management systems were designed to withstand a “100-year flood,” but that the rainfall in July had a likely recurrence of once in a millennium—10 times what the city was built for.

Yet the issue might just be that Zhengzhou hadn’t created the right sponge-to-city ratio.

Since adopting the sponge city mindset in 2016, Zhengzhou has built more than 3,000 miles of new drainage, eliminated 125 flood-prone areas, and created hundreds of acres of new green spaces, the New York Times reports. But “hundreds” of acres aren’t many in a city that sprawls across nearly 200,000 of them.

“When we say a city is a sponge city it doesn’t mean it is completely covered in the strategy already,” says Xu Yichun, associate director at Chapman Taylor, an architectural firm that has worked on dozens of sponge city concepts across China. Xu says cities often adopt the sponge city title as a forward-looking statement because cities need to “change gradually.”

Billing urban development as part of sponge city planning is a way for municipal administrators to unlock extra government funding, too. The central government has spent $14 billion on sponge city concepts to date, designating 30 cities as pilot schemes since 2014. But to achieve Beijing’s dream of renovating 80% of Chinese city space, analysts say the cost will run into the trillions.

In May, researchers at the University of Nottingham estimated the cost of turning  city to sponge at $15 million per square kilometer. With an urban area of some 762 square kilometers, Zhengzhou would have to spend $11.4 billion to completely renovate itself—much more than the $80 million it has spent so far. But creating green space produces an indirect return on investment.

“If you design a better environment, using green infrastructure, it actually increases the land value and increases people’s willingness to live in the city,” Xu says. A U.K. study in 2019 found that homes with simply a view of water sold for 2% more than their landlocked counterparts.

Benefits aside, cities increasingly have no other choice but to invest in water management, as untamed floods are more costly than preemptive renovations. In Zhengzhou, the government estimates, the July floods wiped $10 billion off the local economy—almost as much as completing the sponge city project would cost.

The floods in Zhengzhou struck days after heavy rains swept across Western Europe, precipitating deadly floods in Germany and Belgium that killed close to 200. Even the Netherlands, which exists mostly below sea level and is the archetype for sponge city development, suffered floods.

But the Netherlands—which is littered with “green infrastructure” like wetlands, reservoirs, and canals—sustained zero deaths.

“The Dutch realized you cannot contain flows through structural intervention and instead made room for the rivers to expand,” says Sayanangshu Modak, a junior fellow at India’s Observer Research Foundation. “Cities should adopt that paradigm shift and start building flood tolerance more than flood resistance.