Youngpost: How concrete's played a role in human development

There was an inevitability about this rise of concrete. Across the world, concrete has become a sign of development. In theory, the worthy goal of human progress is measured by a series of economic and social signs, such as life-expectancy (how long people will live), infant mortality (how many children under the age of two die) and education levels. But to political leaders, by far the most important measurement is gross domestic product, a measure of economic activity that, more often than not, is treated as a calculation of economic size. GDP is how governments assess their weight in the world. And nothing bulks up a country like concrete.

That is true of all countries at some stage. During their early stages of development, heavyweight construction projects are a good thing like a boxer putting on muscle. But for already mature economies, it is harmful like an aged athlete pumping ever stronger steroids to ever less effect. During the 1997-98 Asian financial crisis, Keynesian economic advisers told the Japanese government the best way to stimulate GDP growth was to dig a hole in the ground and fill it. Preferably with cement. The bigger the hole, the better. This meant profits and jobs.

Concrete 2: Why it seems impossible to conquer

Of course, it is much easier to mobilise a nation to do something that improves people’s lives, but either way concrete is likely to be part of the arrangement. This was the thinking behind Roosevelt’s New Deal in the 1930s, which is celebrated in the US as a recession-busting national project but might also be described as the biggest ever concrete-pouring exercise up until that point. The Hoover Dam alone required 3.3 million cubic metres, then a world record. Construction firms claimed it would outlast human civilisation. 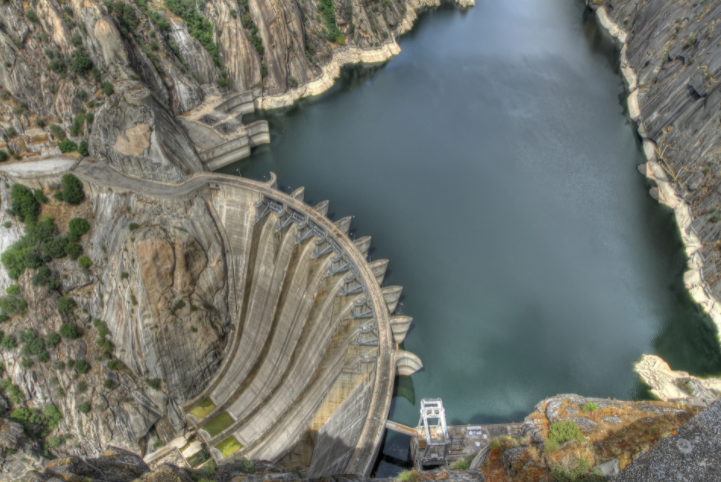 The Hoover Dam was built to outlast humanity. Maybe it will.

But that was lightweight compared to what is now happening in China, the concrete superpower of the 21st century and the greatest illustration of how the material transforms a culture (a civilisation intertwined with nature) into an economy (a production unit obsessed by GDP statistics). Beijing’s extraordinarily rapid rise from developing nation to superpower-in-waiting has required mountains of cement, beaches of sand and lakes of water. The speed at which these materials are being mixed is perhaps the most astonishing statistic of the modern age: since 2003, China has poured more cement every three years than the US managed in the entire 20th century.

Today, China uses almost half the world’s concrete. The property sector – roads, bridges, railways, urban development and other cement-and-steel projects – accounted for a third of its economy’s expansion in 2017. Every major city has a floor-sized scale model of urban development plans that has to be constantly updated as small white plastic models are turned into mega-malls, housing complexes and concrete towers.

The rugged mountains that surround Chongqing protected it from Japanese bombing. Because of this, many of China's factories were moved here and today it is one of the most important economic centre in China.

But, like the US, Japan, South Korea and every other country that “developed” before it, China is reaching the point where simply pouring concrete does more harm than good. Ghost malls, half-empty towns and unused stadiums are a growing sign of wasteful spending. Take the huge new airport in Luliang, which opened with barely five flights a day, or the Olympic Bird’s Nest stadium, so underused that it is now more a monument than a venue .

Although the adage “build and the people will come” has often proved correct in the past, the Chinese government is worried. After the National Bureau of Statistics found 450 sq km of unsold residential floor space , the country’s president, Xi Jinping, called for the “annihilation” of excess developments.

Empty, crumbling structures are not just an eyesore, but a drain on the economy and a waste of productive land. Ever greater construction requires ever more cement and steel factories, discharging ever more pollution and carbon dioxide. As the Chinese landscape architect Yu Kongjian has pointed out, it also suffocates the ecosystems – fertile soil, self-cleansing streams, storm-resisting mangrove swamps, flood-preventing forests – on which human beings ultimately depend. It is a threat to what he calls “eco-security”.

Yu has led the charge against concrete, ripping it up whenever possible to restore riverbanks and natural vegetation. In his influential book The Art of Survival, he warns that China has moved dangerously far from Taoist ideals of harmony with nature. “The urbanisation process we follow today is a path to death,” he has said.

Yu has been consulted by government officials, who are increasingly aware of the brittleness of the current Chinese model of growth. But their scope for movement is limited. The initial momentum of a concrete economy is always followed by inertia in concrete politics. The president has promised a shift of economic focus away from belching heavy industries and towards high-tech production in order to create a “beautiful country” and an “ecological civilisation”, and the government is now trying to wind down from the biggest construction boom in human history, but Xi cannot let the construction sector simply fade away, because it employs more than 55 million workers – almost the entire population of the UK. Instead, China is doing what countless other nations have done, exporting its environmental stress and excess capacity overseas.

Beijing’s much-vaunted Belt and Road Initiative – an overseas infrastructure investment project many times greater than the Marshall Plan – promises a splurge of roads in Kazakhstan, at least 15 dams in Africa , railways in Brazil and ports in Pakistan, Greece and Sri Lanka. To supply these and other projects, China National Building Material – the country’s biggest cement producer – has announced plans to construct 100 cement factories across 50 nations.