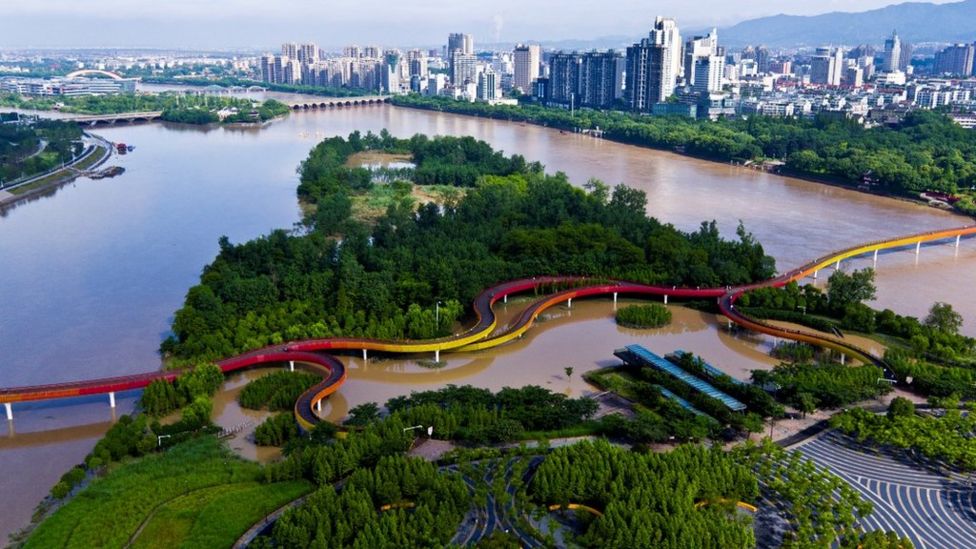 Yu Kongjian can remember the day he nearly died in the river.

Swollen with rain, the White Sand Creek had flooded the rice terraces in Yu's farming commune in China. Yu, just 10 then, ran excitedly to the river's edge.

Suddenly, the earth beneath his feet collapsed, sweeping him into the floodwaters in one terrifying instant. But banks of willows and reeds slowed the river's flow, allowing Yu to grab the vegetation and pull himself out.

"I am sure that if the river was like it is today, smoothened with concrete flood walls, I would have drowned," he tells the BBC.

It was a defining moment that would impact not only his life, but the rest of China as well.

One of China's most prominent urban design thinkers and Dean of the prestigious Peking University's college of architecture and landscape, Yu Kongjian is the man behind the sponge city concept of managing floods that is being rolled out in scores of Chinese cities.

It is an idea he believes other places can adopt - even as some raise questions of whether, in the face of more extreme floods linked to climate change, sponge cities can truly work. 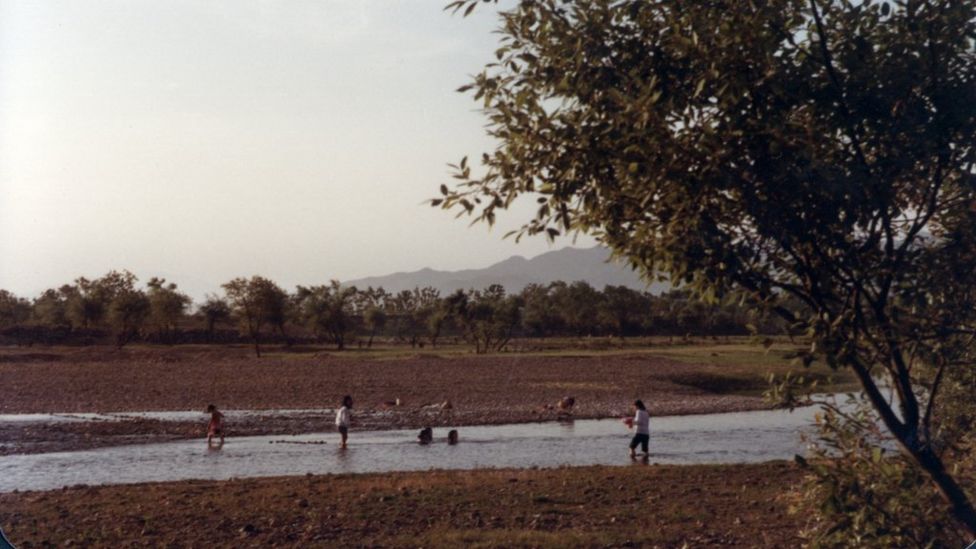 White Sand Creek as Yu remembers it, in a picture taken in 1984

What if a flood could be something we embrace rather than fear? This is the central idea of Prof Yu's sponge city.

Conventional flood water management often involves building pipes or drains to carry away water as swiftly as possible, or reinforcing river banks with concrete to ensure they do not overflow.

But a sponge city does the opposite, seeking instead to soak up rainfall and slow down surface run-off.

It tries to do it in three areas. The first is at the source, where just like a sponge with many holes, a city tries to contain water with many ponds.

The second is through the flow, where instead of trying to channel water away quickly in straight lines, meandering rivers with vegetation or wetlands slow water down - just like in the creek that saved his life.

This has the added benefit of creating green spaces, parks and animal habitats, and purifying the surface run-off with plants removing polluting toxins and nutrients.

The third is the sink, where the water empties out to a river, lake or sea. Prof Yu advocates relinquishing this land and avoiding construction in low-lying areas. "You cannot fight the water, you have to let it go," he says. 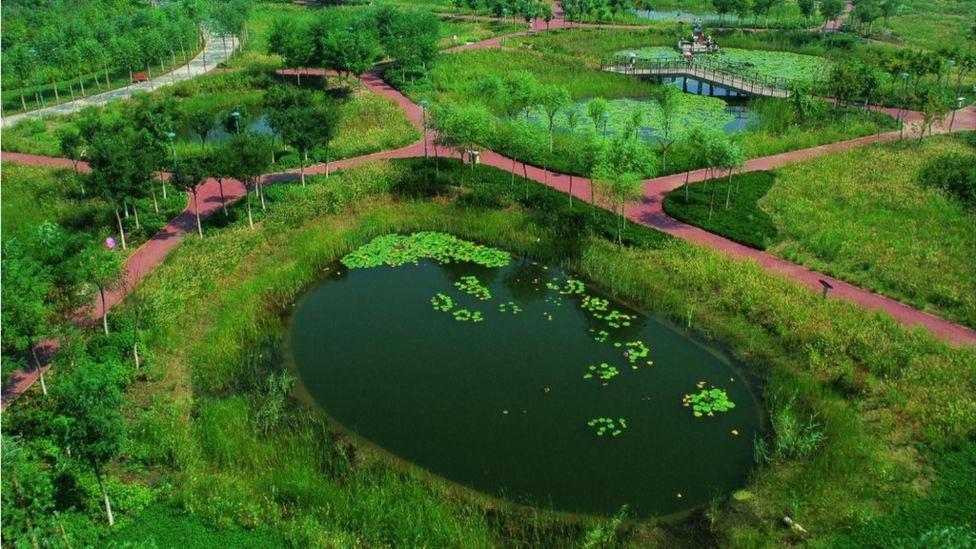 "Right now we have a disconnect... but the thinking is that we have to find our way back to seeing ourselves as a part of nature."

Much of the concept is influenced by ancient farming techniques Prof Yu learnt growing up in the eastern coastal province of Zhejiang, such as storing rainwater in ponds for crops. It has won Prof Yu and his landscaping firm Turenscape many awards.

"Nobody would drown, not even in the monsoon season. We just lived with the water. We adapted to the water when the floods came," he says.

He left for Beijing aged 17 where he studied landscaping, and later studied design at Harvard.

When he returned to his homeland in 1997, China was deep in the throes of the construction frenzy we still see today.

Besides sponge cities, for instance, he calls for natural rustic landscaping or a "big feet revolution", in opposition to overly manicured parks which he likens to the outdated Chinese practice of binding women's feet. 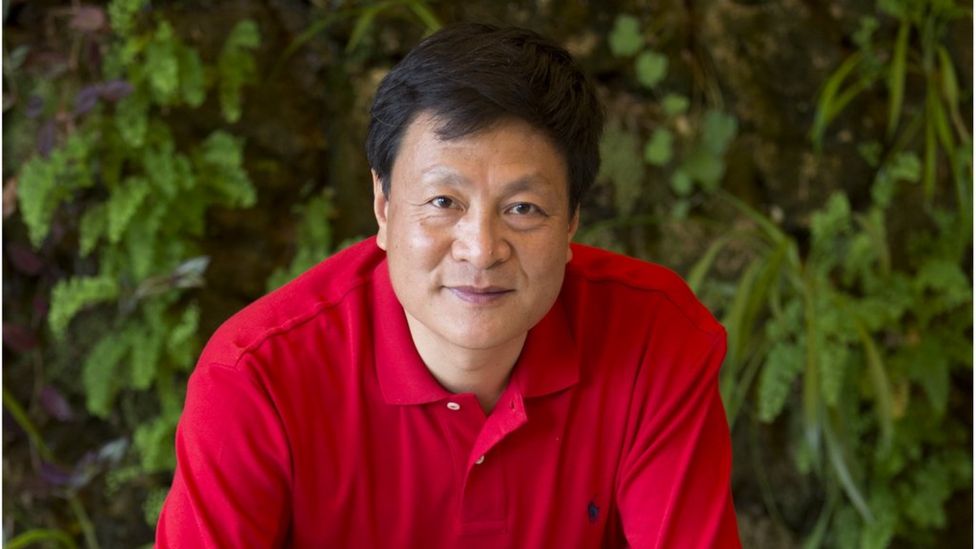 He believes China's coastal cities, and other places with a similar climate, have adopted an unsustainable model for building cities.

"The technique that evolved in European countries cannot adapt to the monsoon climate. These cities fail because they have been colonised by Western culture and copy their infrastructure and urban model," he says.

He initially faced opposition from the establishment, some of whom were annoyed by his vocal criticism of Chinese engineering including projects of national pride like the Three Gorges Dam.

"I'm not a Westerner, I'm a Chinese traditionalist," he says with a laugh. "We have thousands of years of experience, we have the solution you cannot ignore. We have to follow our Chinese ways."

He has cannily appealed to Chinese officials' sense of patriotism in lobbying for sponge cities, helped by media coverage of his ideas following high-profile flooding disasters in Beijing and Wuhan in recent years.

It paid off. In 2015, following President Xi Jinping's endorsement, the government announced a multi-million yuan plan and an ambitious goal: by 2030, 80% of China's municipal areas must have elements of a sponge city and recycle at least 70% of rainfall.

Around the world, more places are struggling to cope with more extreme rainfall, a phenomenon scientists have linked to climate change. As temperatures rise with global warming, more moisture evaporates into the atmosphere, causing heavier rain.

And they say it will only get worse: in the future, rainfall will be more intense and severe than previously expected

But with heavier storms is the sponge city really the answer?

Some experts are not sure.

"Sponge cities may only be good for mild or small rainstorms, but with the very extreme weather we are seeing now, we still need to combine it with infrastructure such as drains, pipes and tanks," says flood management expert Faith Chan of the University of Nottingham Ningbo.

He also points out that for many dense cities where space is a premium, it may be difficult to implement some of Yu's ideas such as providing land for floodplains.

Last summer, a series of floods killed 397, affected 14.3 million, and contributed to $21.8bn in economic losses, according to UN estimates.

But Prof Yu insists ancient Chinese wisdom cannot be wrong, and these failures are due to local officials executing his idea improperly or in a piecemeal fashion.

The Zhengzhou flood earlier this year, he says, was a classic example. The city had paved over its ponds, so not enough water was retained upstream when the rain began.

The main river had been channelled into concrete drains, causing water flow to speed up "like a flushed toilet", he says. Important infrastructure such as hospitals were built on low-lying land.

"A sponge city could handle any flood - if it doesn't, it's not a sponge city. It has to be resilient," he says.

Another question has been whether the sponge city concept is truly exportable.

Prof Yu says flood-prone countries like Bangladesh, Malaysia and Indonesia could benefit from the model, and some places such as Singapore, the US and Russia have started implementing similar concepts.

But much of the success of the sponge city's proliferation across China is arguably due to its centralised government and hefty state coffers.

Prof Yu says a sponge city would cost only "a quarter" of conventional solutions - if done right. He argues that building on higher ground and allocating land for flooding, for instance, would be cheaper than building a pipe and tank system.

Many of Turenscape's projects are now aimed at fixing flood infrastructure that cost millions, and this money could have been saved if officials followed sponge city principles in the first place, he says.

Using concrete to manage a flood is thus like "drinking poison to quench your thirst… it is a short-sighted view," he says.

"We have to change the way we live to adapt to the climate. If they don't follow my solution, they will fail."