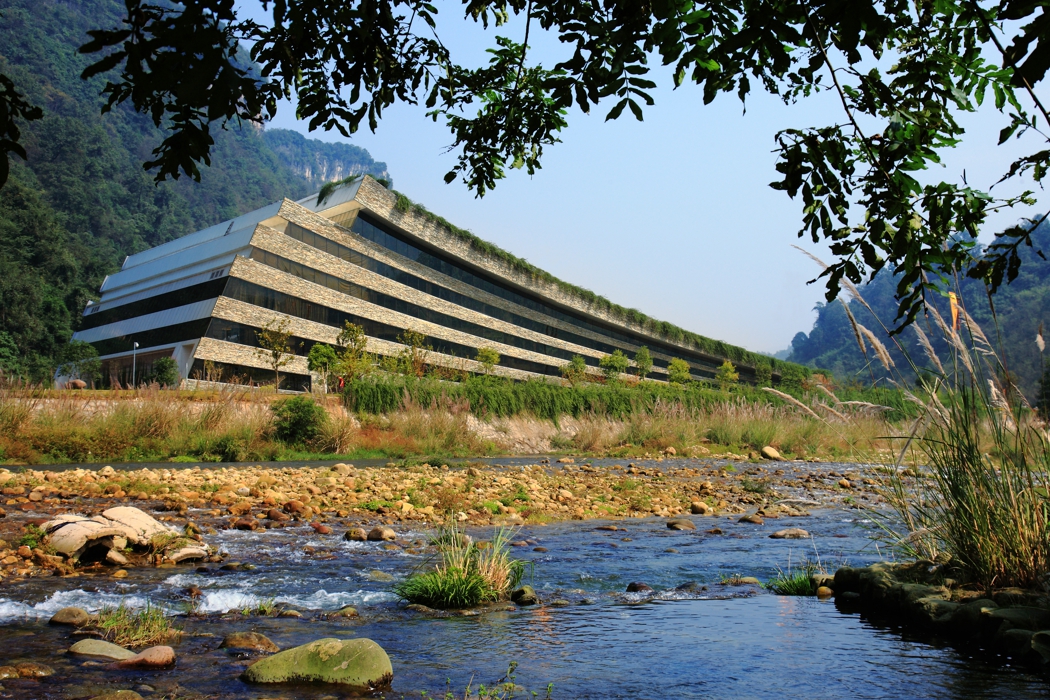 The Construction site is located in the front of the cave plaza of Yellow Dragon Cave in Wuling River, zhangjiajie, a world-famous Scenic area of Hunan province. In the front, there is Suoxi River back against the cliff. Most of the functions are arranged underground, to avoid the disturbance to the scenic spot, which is lead to the volume above the ground has reduced. The overall situation is the elevation of the structural form, to respond to the crustal structure of the surrounding mountain of the core of the Wuling spacious mountain, forest and the original design of the roof off the east side of the main entrance to the ground, the main entrance of the water is into the sink through the square. The overall impact is a complement to its surroundings, and it coexists with the environment. When the night comes, warm light goes through the glass, which may well create a sense of different bends of rock fluttering in the air.
This form for the internal function is that it conjoins the audience hall, the stage with its backstage, side table, and the space above the curtain properly and makes every part of the space full and proper use. For example, it skillfully solved the issue that the higher end which cocked up of the stage is the most part need of height, which was a problems of the Somatotype of the traditional hall；as well as the sinking stage design, making the use the foundations of slight slope to be the auditorium, leading to save the cost and to good effect, the roof from the slope to the ground is green planting, of an energetic efficient results, and mixed with rice landscape of the east. The water surrounded the building is designed for the adjustment of climate. Upward reflexed roof can reflect the sound from the stage into the auditorium, especially to get valuable resumes reflections for the audience in the back row.

The landscape around the east buildings were hard paves and man-made grasses, as part of the project, the Turen design remove the plaza, the grass and European structures, recover local rice and regional planning layout of an indigenous forms of the dwellings, having gradually become a great tourist attractions in Yellow Dragon Cave.

Design is partially adjusted during the construction, and the original design inspiration comes from the breaking and upwrap of the earth rock, and not the book holding by the monkey in the entrance. It was initially named of “Yellow Dragon Cave theatre” instead of “Halleluja Concert”. The original design intended to make the entrance to the roof down straight to the ground, but this was not fulfilled during the construction, and the entrance could not be invaginated below the eaves. This was a pity.
Comment(4) Share