The Red Folding Paper in the Greenway 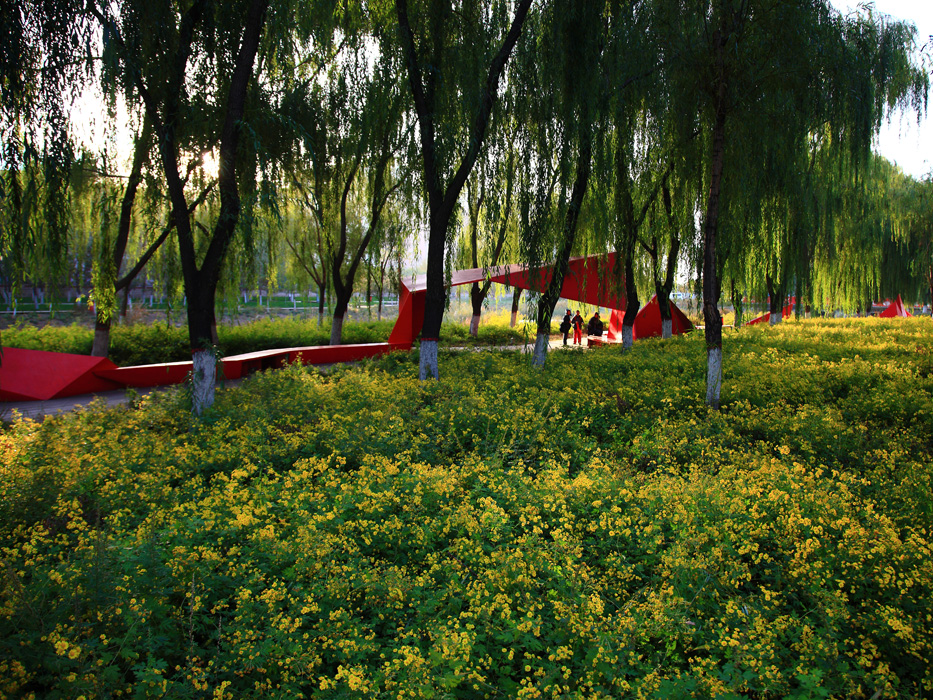 The Red Folding Paper in the Greenway

This project makes green space full of vigor and vitality through an innovative combination of installation art, outdoor furniture and greenways. Design intervention for the overall greenway includes the ecological restoration of a polluted and channelized river that transformed a previous inaccessible “urban back warren” into a recreational and communicational “urban front yard” for the residents, particularly the children, who are now enjoying this sprightly and vivacious place on their daily route to school. As an important part of the greenway at a larger scale, the Red Folding Paper, is an art installation and outdoor furniture combining seats, trails, bicycle shed and lighting, which has given the greenway its identity and a sense beyond "green."

Situated in the eastern part of Qian'an City, Hebei Province, the Red Folding Paper is part of Sanlihe Greenway, which is about 16-km long and covers an area of 800 hectares. The core concept of creating this greenway is to bring the ecological landscape of Sanlihe River, the mother river of Qian'an, back to the region. Running across the city, Sanlihe Greenway helps to catalyze the urban construction on both sides of the waterway. Implemented strategies include sewage and solid waste control, rainwater harvesting and maintaining for the constructed areas on both sides, water diversion from the upper reach of Luan River into the city center, planting along the greenway, which functions as an axis providing walkways and bicycle paths with recreational and art installations along the way.

The Red Folding Paper is located at the core section of Sanlihe Greenway, a linear space running north to south, which is about 700-m long and covers an area of 12 hectares. The site used to be a 10-meter-wide canalized river with concrete embankment. The river has gone dry for several years, with willows more than 10 years old thriving on both sides. The linear-shaped site separates the urban residential area from the peripheral rural area, with high-density urban residential area on the west side and an elementary school (the Fourth Experimental Primary School of Qian'an) and a kindergarten on the southeast side.

The Qian'an City has long been known as “Northern Paper-cutting Town”, with the papermaking industry started in Yongle period (1403-1424) of Ming Dynasty. The paper brands now include Lingzhi calligraphy paper，Gaoli paper and the Zhiji Paper (machine-made paper). The first mechanical papermaking factory in northern China was founded in Qian'an. The once famous Qian'an Hua-Feng Paper Factory is located on the north side of the site (the factory has been shut down for years, and is currently planned as a museum). The paper-related arts are also prosperously developed because of the paper industry, and become one of the major cultural features of the Qian'an City. The most distinctive art form is Qian'an paper cutting, also known as paper carving, window-decoration cutting or paper-cut painting, which dates back to the late Qing Dynasty. Paper cutting tools include scissors and carving knives. Although the tools are varies, the works is called paper cutting in general. The Qian'an paper cutting has gained a high reputation all over China for a long time.

2. The Red Folding Paper in the Greenway

Based on the site conditions and the city's social, cultural and historical background described above，the designers removed the cement embankment along the river，while kept the willows along the riverbank. For the purpose of preventing the trees falling down due to the embankment removal, the designers filled the dry river channel with planting soil. A new waterway is created on the east side, functions as an ecological river collecting storm-water runoff as well as a scenic byway reconnecting the upper and lower reach of Luan River. The original dried-up channel has been transformed into a flower-ribbon in the forest, where lots of native wild chrysanthemums (Chrysanthemum indicum) are planted. Wild chrysanthemum is a self-seeding plant requiring low-maintenance. The plant is native to China, and usually used as herb medicine. In spring and summer the green plants lush through the fields, while in autumn the yellow flowers bloom prosperously, becoming a pure background with rustic charm for the artificial installations on site---The Red Folding Paper.

Inspired by the well-known local folk art of paper cutting, the Red Folding Paper was created to make the greenway a lively and attractive destination. The Folding Paper is made of fiber glass，a high-plasticity material which can be easily constructed on site and maintained afterward. The overall idea is to integrate outdoor furniture and park facilities, including bicycle shed, shading canopy, rain shelter and benches, making them into one continuous art installation. In addition, a wooden walkway runs through the Red Folding Paper and makes the whole piece an experiencing corridor.

Integrating diverse functions while employing a unified form, meeting functional needs while providing aesthetic experiences, as well as being visually appealing, are the keys to the success of the Red Folding Paper. Employing a 1:50 paper-cut model, multiple tests were made by the designers together with fiber glass technical experts. The joint-effort also helped to make the final design decisions, followed by the on site fabrication and construction. Taking into consideration the color palette created by its surround natural landscape, with dense willow branches on top and a think cover of wild chrysanthemum on the ground, Chinese red was picked by the designer as the color of the Folding Paper. In a landscape setting mostly dominated by the color of green, with the exception when the yellow flowers blossom in autumn followed by a period of harsh and colorless winter in northern China, the Red Folding Paper creates a strong visual contrast with the context while sits in harmony with the landscape around it.