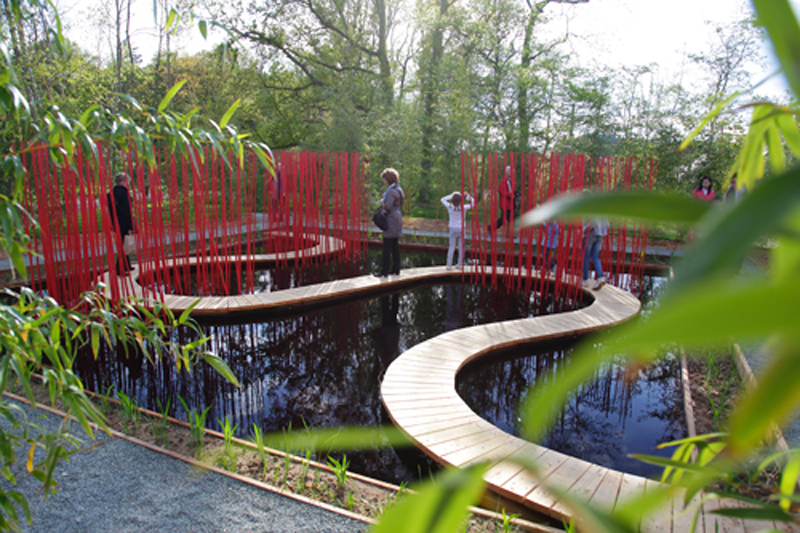 Installed in Château Chaumont, French, this small rain garden, Square & Round, meaning Land and Sky, is a contemporary re-interpretation of Chinese Traditional Gardens by applying the formal language of curvilinear and square, the spatial experiential strategy of enclosure and making small into big, and through the building technique of cutting and fill. This project integrates the contemporary concept of stormwater management with the Chinese gardening philosophy about man and nature，and provide an intimate pleasant experience both for viewing and for performing.

Traditional Chinese garden represents natural landscapes in miniature. Typically built by scholars, poets, and former government official, the garden is always enclosed by a wall and has ponds, rocks, trees, flowers, and assortment pavilions that are connected by winding paths. Through a series of carefully composed scenes, the traditional Chinese garden becomes a replica of nature in miniature, "an artificial nature" intended for daily use.

Spatially, the Chinese intend to see big from the small, and developed a taste of closed, box-within-box landscape, compared to the westerners’ open, point-to-point and radiant view. Square & Round / 方圆distills the Chinese experience of landscape but with a new look, both psychologically and physically. A 9x9m square-shaped rain garden situates right in the center of the project, a depression excavated on site that allows rainwater runoff from the surrounding area. Through the cut-and-fill process, the mount is formed around the pond with bamboo planted on top, which creates a dense screen to block the pond from its surroundings. The creation of a curved floating path visually dividing the water surface in two areas, is inspired by the Chinese T’ai chi symbol, which is based on the idea that everything goes in cycles: the years, the months, the seasons, even human life itself. Through the integration of two seemingly contrasting forms - Square & Round - 方圆 represents the idea of complementary rather than conflicting.

Sharing the Chinese garden’s tradition of being a replica of nature in miniature, Square & Round / 方圆demonstrates an ecological minimalism beyond an aesthetic one within an area of 100 square meters. Storm water is retained in the depressions with Chinese lotus (Nelumbo nuceifera) blossom in summer,. Chinese plants are applied in the project to create a tranquil space with a sense of both Chinese traditions and contemporary sensibilities and materials. Bamboo branches that were seen as garden waste from the bamboo groves that define the square boundary will be collected on site and reused in this project: the red colored bamboo sticks groups in the middle of the reflection ponds along the curvilinear (symbolizing "round") wooden path. Combined with vertical bamboo sticks, the path not only creates a diagonal link across the water but also provides a "winding through" experience that Chinese classical gardens always celebrate.