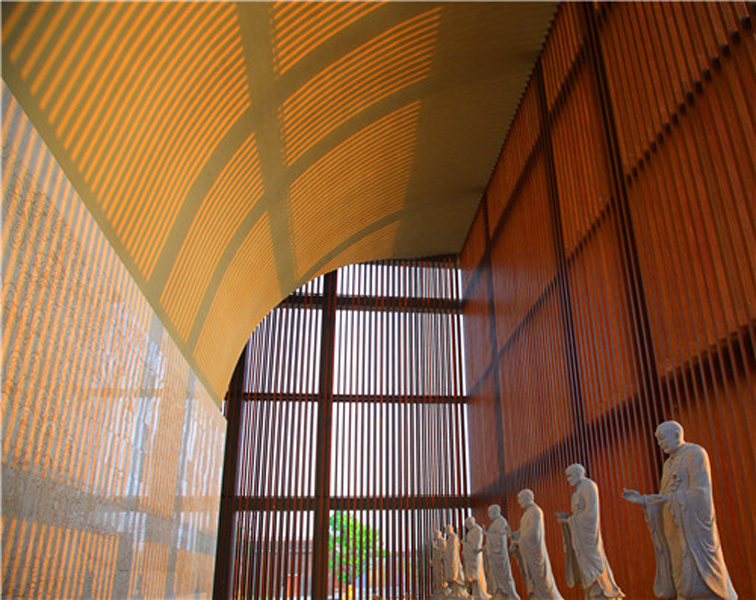 Inspired by modern architecture and landscape, this architectural complex reflects ancient Zen ideas of emptiness and anatta. Between the expression of Dhyana and architecture, the design is a modern interpretation of traditional Buddhist temples. At the same time, the design explores how the spatial language of Zen ideas can connect with ordinary people. The design is not perfect, but construction of the new temple has allowed ideas that have not changed for thousands of years to be re-explored.

The project is located inside the Baitang River Wetland Park in Suining, Xuzhou, Jiangsu Province, and is a non-palatial modern temple complex designed with non-traditional techniques. Construction began in 2010 and lasted for three years. The unique and tradition-breaking architectural form and style of the Moon-floating Temple has, since completion, become a distinctive cultural site and a place for Buddhist Zen rites to be held.

The Moon-floating Temple was rebuilt on the former Ksitigarbha Temple (di zang si) site in Suining, which was built during the Ming Dynasty and was destroyed during Japan’s invasion of China. After China began reform policies in the late 1970s, the local Communist Committee and government started implementing a new religious policy that allowed the local Buddhist community to propose restoration of the temple. In October 2010, the Ksitigarbha Temple was moved and rebuilt in the Baitang River Wetland Park. It was then renamed the Moon-floating Temple because both its layout and design are set around water, but also because of the Buddhist concepts of cause, effect, completeness and incompleteness, which resemble the physical form of the moon. The architectural style of the Moon-floating Temple is unique in its combination of Buddhist and modern architecture, something that has been helpful in promotion of Buddhist culture.

At its core, the design of the Moon-floating Temple is a classical layout surrounded by hills and near water, with a spirit of engagement and architecture of simplicity that accommodate Zen aesthetics of space. In terms of architectural style, the Moon-floating Temple breaks conventional patterns and the traditional architectural styles of Chinese temples, combining modern architecture with the layout of Buddhist temples. The architectural space seeks a closeness of simplicity and comfort, spatial spirit, and a balance of religious and modern features. These design goals are seen in the approach to the ecological environment, as well as the classical layout and practical function. Modern architecture is combined with traditional temple structures – the interior of the temple follows the traditional layout of axial symmetry and is enclosed with gardens, while the exterior is completely a modern style.

The architectural complex consists of 18 programmed units, specifically: the main gate, Hall of Four Heavenly Kings, Mahavira Hall, Sutra Depository, Ksitigarbha Hall, Avalokitesvara Hall, prayer Room, Zen rooms, monk’s cells, guest rooms, administration, reception, dining, exhibition and shopping, kitchen, lounge, storehouse, and social hall. The general layout of the complex is south-to-north, with one longitudinal axis and two horizontal axes. Along the longitudinal axis are main gate, Hall of Four Heavenly Kings, Mahavira Hall and Sutra Depository. On the first horizontal axis are Avalokitesvara Hall and Ksitigarbha Hall, while the second axis prayer room and Zen room. In the vicinity there are also monk’s cells, kitchen, guest rooms, exhibition and shopping hall. On the outside of each hall or room are wood-like metal protective racks that look like drapes and cast a feeling of space that is tangible and yet intangible, mobile and yet static, flexible and transparent. The main gates are the red wooden style commonly used for temples, and the wooden bell and drum towers enable the praying bell to be heard in a farther distance, and combining Buddhist blessings of enlightenment, purification and praying for blessing.

Moon-floating Temple is the first, and currently the only, modern non-palatial site for Buddhist activities in China. The layout of the entire complex is integrated and complementary to the water and garden landscapes, combining ecology and comfort, simplicity and aesthetics, Zen meditation, and mind-enriching connection to water and sky. Since opening, the temple has been well received Buddhists and the larger public, becoming a model for the harmonious integration of humans and ecology, religious and secular, modern and old.