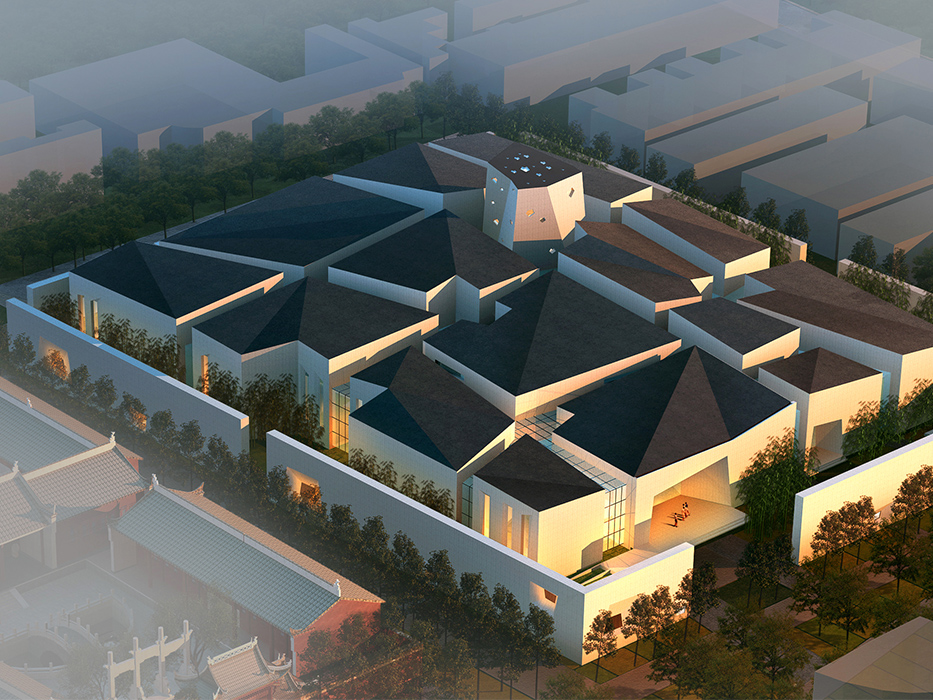 Consisting of two main areas, the new development is located within the existing urban fabric and adjacent to the city’s ancient Confucius Temple. The biggest challenges of the project included: How to integrate large, modern architecture with of the density of the ancient city and the neighboring buildings? Can you create a tranquil museum environment in a noisy city? The project uses indoor street corridors to separate the exhibition spaces, addressing circulation and lighting while breaking up the building to integrate the texture of the old city. The walls, which are also the exhibition space, reference traditional compound building groups, while screening recent and noisy urban projects.

Tongcheng, located between Hefei, capital city of Anhui Province, and the urban belt along Wanjiang River, is a well-known provincial-level city.

The planning for Tongcheng proposes turning the old city into a cultural center emphasizing protection of historical relics, cultural education, art, traditional industry and commerce, and tourism in order to create a historical area that has the unique characteristics of Tongcheng. The design and construction of the Anhui Tongcheng Cultural Museum has become an important carrier and symbol for restoring the historical appearance of the city and unique local culture.

With the Tongcheng School as its core, the Tongcheng Cultural Museum also features traditional folk culture. The Tongcheng School is the largest prosaic style in the literary circle of China’s Qing Dynasty. Literary theories were developed in conjunction with Confucian studies, textual criticism, poems, and articles, attracting a large number of scholars and writers. The Tongcheng culture is best reflected in the Tongcheng School, where intellectuals lived in groups, worshiped Confucius and advocated loyalty, filial piety, modesty, politeness, and civility.

In addition to the Tongcheng School, the site is home to rich and diverse architectures concentrated to the north, west, and south of the ancient city, becoming important historical and cultural streets of the old district. The historical structures were mainly built during the Ming Dynasty, Qing Dynasty and the modern Republic of China. While the official residences are organized around small courtyards, ordinary houses are characterized by gardens that integrate indoor and outdoor space. Among the ordinary houses, most are four-sided compounds, U-shaped houses, L-shaped houses, houses with double side rooms, long narrow houses, six black rooms, and square-shaped houses, containing the cultural characteristics of Jiangxi and Huizhou cultures and the ancient Anhui culture.

The planned site is located at the heart of the ancient city of Tongcheng. Since the Ming and Qing dynasties, the Confucius Temple has been the heart of the city. The temple sits at the center of the city, neighboring People’s Square, facing the prosperous Heping Road, and surrounded by old, prestigious residential streets. The Confucius Temple is the symbolic heart of Tongcheng Culture.

The redevelopment site sits in the old city, with the Confucius Temple splitting the site into east and west sections. The design area includes the Confucius Temple at the center, the western and eastern sides, and the People’s Square to the front, covering a total area of five hectares. The western site is a business street of 2,100 square meters, while the eastern side of the site is 8,000 square meters.

The winding streets and alleys of the old city were the inspiration for the new design, which reflects a modern interpretation of alleys. The space of the museum building is segmented into relatively independent units with each organized around the existing alleys. As such, the design becomes an important marker of the city’s ancient history.

The architectural design combines a mutual respect of architecture and landscape using the alley texture of the old city as the design language for both the business street to the west of the Confucius Temple and the cultural museum to the east.

Alleyways on the ground floor connect the exhibition halls, and the basement floor has the layout of a large space that can adapt to diverse exhibition demands. In addition to connecting the exhibition halls, the alleys provide lighting and ventilation. The basement floor can be deployed to bring the height of the building down to the ground. Traditional materials, such as gray bricks and wooden frames are used to extend the design of the old city.

The exterior walls are white hanging concrete plates while the ceiling is a black stone that creates a feeling of neatness. The entrance to the museum is simple but impressively grand, while the front garden appears to penetrate and the exhibition halls inside, creating a flow of functions that emphasize permeability between external and inner spaces. The courtyards are arranged to maximize lighting and are arranged around a tower atrium that offers birds eye views of the entire site. The windows of the sidewalls allow for interesting lights into the rooms, creating an affect of light and shadow. Plants shade the interior corridors, creating quiet spaces inside the museum.

Surrounding the museum is a five-meter high scenery wall that creates a cascading entrance space that reflects the modesty and integration of Tongcheng Culture. The temple is framed by plantings of bamboo that magnify the procession to towards the temple. The integration of building and landscape emphasizes the tranquility and elegance of Tongcheng.

The area to the west is surrounded by landscape and provides entrance the commercial buildings, which are also accessible via an underground pedestrian mall. The business district to the west of the Confucius Temple supports antique transactions, exhibition and art sales, art galleries, and other businesses that support cultural functions. The primary entrance to the business area combines white walls and bamboo to create an academic atmosphere.

An antique market occupies the ground floor of the business area, covering 2,757 square meters, but there is also room for restaurants, teashops, and stationary and bookstores at the basement level. The façade of the business area is grounded by a courtyard and similar in appearance to that of the museum.