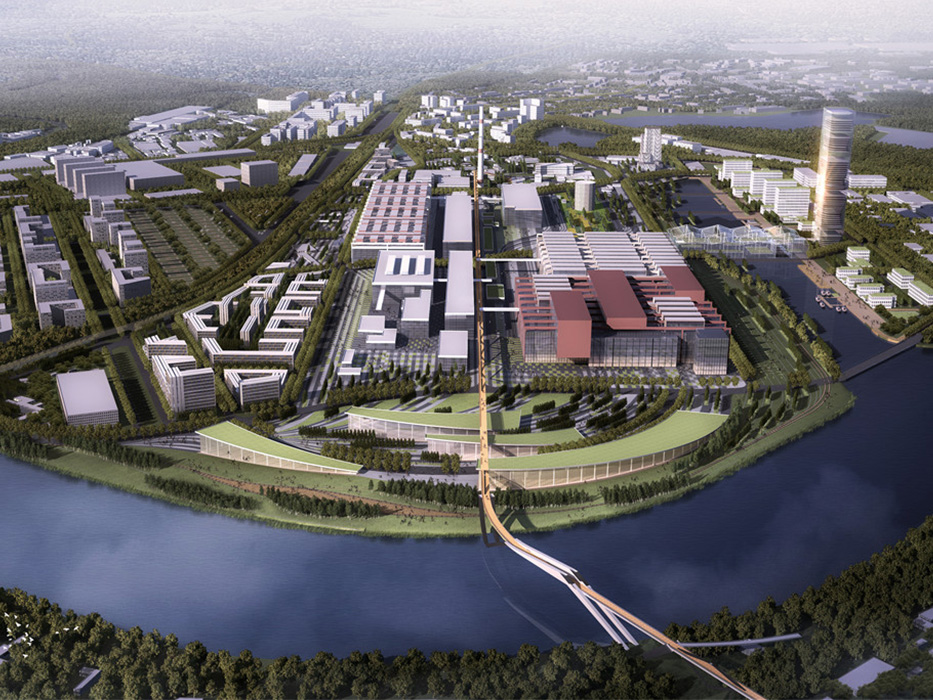 In comparing the maps of metropolises that were nurtured by rivers, it is astonishing to find that the Moscow River has still retained its pronounced, meandering form even after a millennium of human settlement.

The meanders of a river are one of the most distinguished features of nature’s high resiliency, showing the flexibility, suitability and strength of natural hydrology systems. However, this sinuosity is almost exclusive to the natural world and is extremely rare in metropolises with long histories of settlement. River cities have a pattern of harnessing natural meanders by armoring embankments and straightening curved waterways, especially with the advent of the industrial revolution and the subsequent demand for fast urban transit. Although these arbitrary actions have resulted in temporary efficiency in transportation and industrialization, they have often permanently eradicated one of the most important natural river features, and together the whole set of eco-services that ensure the sustainability of the urban ecosystem. Entering into the 21st century, the desire to keep in touch with nature and enjoy the resiliency of ecosystems has returned to urbanized areas due to the end of primitive industrialization and the rise of new technologies that promise more sustainable growth with limited resources. City dwellers all over the world now rush to rural areas to enjoy spectacular views of winding rivers.

Moscow has the unique opportunity to restore the natural features of its river, as one of the few cities whose meanders remain almost intact. By restoring, reorienting, reorganizing and programmatically curating the riverfront of Moscow River and its area of influence, there is a great opportunity to restore and create multifaceted resiliency for the urban area, resiliency that includes not only of the ecosystem, but also transportation, culture, economy and growth. The undulating meanders of the Moscow River, which has survived numerous periods of turmoil with the city and emerged stronger than ever, will eventually guide the world-renowned metropolis through the end of industrialized urbanization and into a new, eco-sustainable era that calls for resiliency to ensure harmony between nature and human society.

The design vision of the Moscow River framework masterplan is based on the avant-garde concept of creating a Resilient River with its pronounced meandering form. Rather than treating the river as a single element with mono-functional, conventional planning methods by designing places around the river embankment in singularity, the Moscow River framework masterplan is designed with a totality reverse planning method, an integrative approach that is both scientifically sound and aesthetically pleasing, from the perspective of the city ecosystem as a whole.

The city of Moscow is structured around a winding blue line with a wedged green network: the Moscow River is rooted as a spine which threads through the entire city, complimented by a robust green network system that penetrates the city center of Moscow. The designed framework uses a holistic approach that creates green infrastructure in the form of a series of meanders to provide ecosystem services to the City of Moscow. The meanders will act like a living blue thread that sews fragmented city areas together and restores their natural benefits. They are to become the new hearts of the city and provide a blueprint for city ecological renewal, urban connections, social equity, cultural identity, and vibrant economy to adopt in time. The final resolution is composed of four major strategies: a regulating structure, transformative content, detailed priority development and incremental time curation to strive for city resilience.

The whole framework masterplan will deal with five challenges identified in Moscow. These challenges can be solved for a great part by reorganizing the relationship between the river and the city as well as the spatial organization of the river influence area. The five challenges are ecological reconstruction, transport reorientation, social rebalance, cultural revival and economic reactivation.

To overcome these five challenges, the proposal consists of four general design strategies to create a resilient river for Moscow:

1) Establish an ecological infrastructure – to create an ecological security pattern which regulates the masterplan framework development. It is a deep form which secures a stable and everlasting structure that protects and enhances the critical natural and cultural processes of Moscow. Based on this resilient infrastructure, the pattern will guide and foster future urban development. This is the foundation of the alternative urbanism that will ensure ecological and cultural resilience as the first step.

2) Reorient urbanism to the river – the growth of ecological and cultural infrastructure. Restructure and reorient the urban development along the Moscow River’s natural assets as a place-making strategy to leverage investment and improve Moscow City’s ecology, transportation, and social, cultural and economic development. The river will help redistribute the centralized functions of the old, monocentric city center by creating numerous new centroids, applying a polycentric planning strategy along the entire river as the city’s renewal axis. These centroids will act as catalysts of development—the ultimate river revitalization masterplan will be actualized through ripple effects.

3) Design a fascinating water frontage – details explanation of how the waterfront of the Moscow River will transform and how the transformation will help ease the pressure on the old city center. Catalyst points are clearly defined to allocate priority areas that should be developed first to energize adjacent areas and finally realize the eco-cultural waterfront corridor that will guide the city into the new century, not only spatially, but also ecologically, transportationally, socially, culturally and economically.

4) Curate vision through time – generations of civic leaders understood that the principles of land use and architecture change over time, whereas the intrinsic landscape and planning structure will endure and long last. It is critical that the framework design works not only in the present but also the long-term, facilitating future masterplan developments as part of the city vision.

The Moscow River will be the River Recovered, the prime element which secures the city structure with a regulated pattern, guides polycentric urbanism with multi-dimensional developments and curates a prominent vision that will endure through time for the City of Moscow.