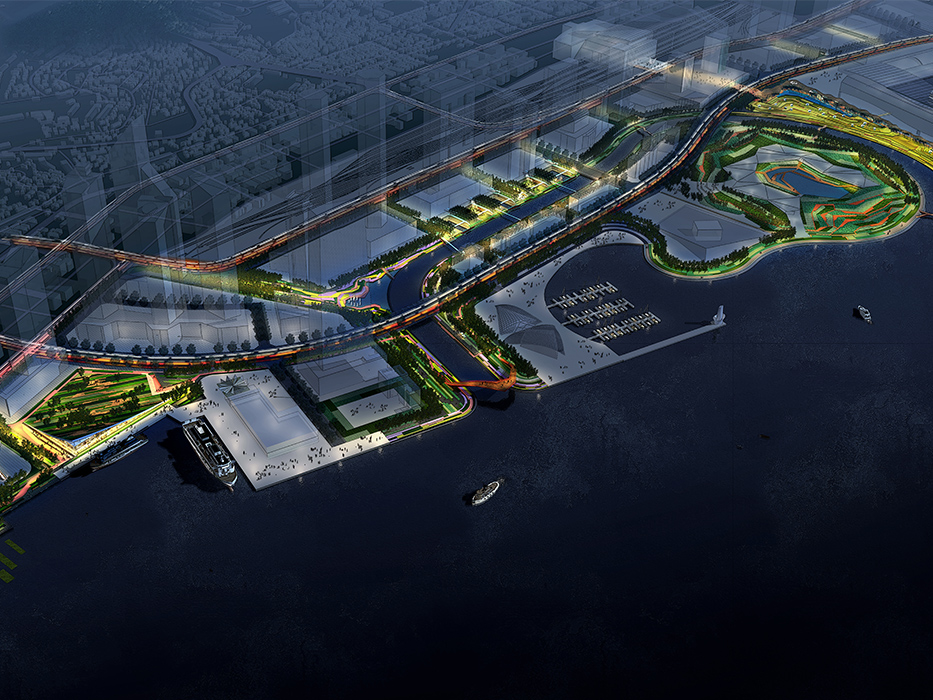 We see the origin and the future of Busan when we see the rice field of Busan's fertile river delta and the grounds of the resilient piers at North Port. Rice was the catalyst for the first opening of Busan Harbor in 1876 by Japan. The Japanese Empire seized Korean rice during its occupation through the North Port in Busan. Rice farmers eventually lost their land through modernization and became struggling urban laborers. For the people of Busan, rice was the way of life, the root of their existence, and represented their heritage during the painful Japanese occupation. The Rice Garden at the North Port Park, created by the park's old and new ground with the sun, wind, and fields with trees, heals the pains of the past and recreates the future of Busan. A beautiful new park is born where enduring heritage, fresh new urban living, and healthy and resilient ecosystem all come alive as one productive landscape - The Living Port of Busan.

The Busan North Port has gone through a series of significant transformations over time. It emerged as a small local fishing village and opened for international import and export activities at the very beginning of the Japanese occupation. It gradually became the largest commercial port in Korea, playing a significant role as a maritime trading hub in east Asia and beyond. Currently, it is on the cusp of its largest transformation yet, as most traditional container shipping operations are being shifted to the Busan New Port. The once working waterfront is set to become the "Living Port," a new foundation for a progressive lifestyle which promotes a reclamation of the past, maintains the vigor, vitality, and regional heritage of Busan, and strives to set a new standard for cultural and environmental appreciation.

Past
The port opened in 1876 as a forced trade agreement with the Japanese to import Korean rice and introduce Japanese goods into the Korean market. It also gradually serves as a base of operations for Japanese efforts to colonize and exploit Korean resources. Rice production and export reached its peak in the 1930’s with over 50% of rice grown in Korea was imported by Japan. Manufacturing capacity in Korea grows, as ship-building, wine-making, rice cleaning, and textile industries emerge. The port becomes a trading hub for goods coming in and out of Korea.

Present
The port flourishes after Korean liberation and becomes a full-scale industrial harbor and the largest in Korea. Its capacity is one of the largest in East Asia and occupies an important geopolitical location as a key link between Chinese and Japanese ports. In addition to container shipping, the port opens terminals for both international and domestic cruise ships to promote tourism. The proximity of the mountains and beaches in Busan is a large draw. Busan also becomes the host city of the largest film festival in Asia, and is thought by many to be a potential gateway city into Asia.

Future
The Busan Port
Authority seeks a vision for the transformation of the North Port into a world-class watefront destination. The Living Port vision will pay homage to the long history of the port in various ways while engaging the most exciting potentials for the future. Moving forward, the port's origins as an exploited rice exporter will be remembered together with the engagement in contemplative and ecological cultivation of rice fields on the site. Many existing port features, both large and small, will remain as tactile and visual reminders of the original physical gounds of the old port and piers.