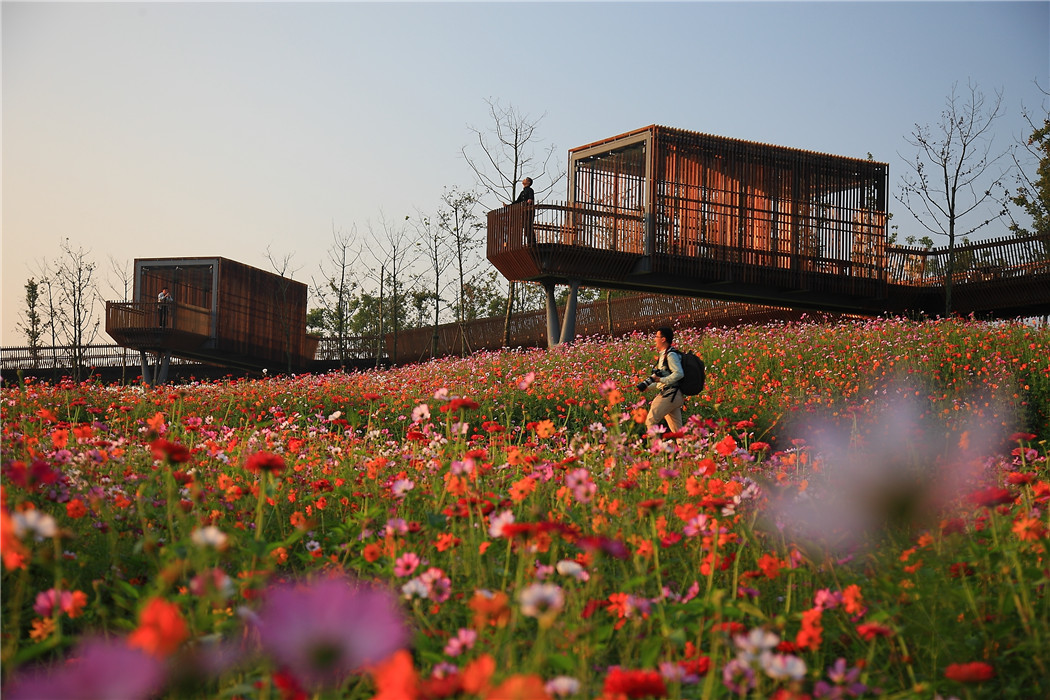 On a site surrounded by dense new urban development, the landscape architect created a dynamic urban park by incorporating the agricultural strategy of crop rotation and a low maintenance meadow. An elevated floating network of pedestrian paths, platforms and pavilions create a visual frame for this cultivated swath and the natural features of the terrain and water. Using these strategies, a deserted mismanaged landscape was dramatically transformed into a productive and beautiful setting for urban living, while preserving the natural and cultural patterns and processes of the site.

The project is located on the west bank of the Shiliang River, in the West New District of Quzhou City, Zhejiang Province, with a population of 2.5 million. The city, boasting a history of over 1,800 years, is known to the world because of its strategic location on the east coast of China. During the World War II, the US Air Force used the small airport at Quzhou as a base for the Doolittle Raid (the Tokyo Raid), on 18 April, 1942.

With a total area of 32 hectares, the site is surrounded by intensive urban development, bounded by the river on the west and an urban thoroughfare at the east. It is a remnant patchwork landscape made up of rolling hills covered with a mosaic of exposed red sandstone; vegetated areas of bushes and grasses; small swathes of abandoned farm fields; a riparian flood plain along the river basin; and a linear grove of trees bordering the river. Scattered in this landscape were small village trails paved with river stones, an old resting pavilion, an irrigation ditch leading to a pump house that pulled water from the river. There is an elevation drop of 20 meters from the urban roadway to the riparian flood plain and a sandstone cliff at the water front. The conventional approach in developing a large new urban district in China is to level the site–the method used in the surrounding landscape for urban areas and parks. Simply because this rugged landscape mosaic is not considered valuable or aesthetically pleasing and the cultural landscape elements are deemed insignificant, the common practice of leveling the ground simplifies the mechanical and engineering processes and facilitates the installation of infrastructure such as roads, water supply and storm water drainage.

The client’s simple request was that the park should be a multifunctional green space that provides recreational opportunities for the citizens. The landscape architect took this opportunity to explore innovative concepts to realize the potential for an urban park that is not only a recreational green space, but also serves as ecological infrastructure that provides holistic ecosystems benefits. The design goals also included addressing big picture issues such as climate change, food and energy security, water resilience, and a new landscape aesthetic of productivity and low maintenance. Ideas such as “befriending the flood”, agricultural urbanism and productive landscape, minimum intervention, performative landscape, etc. are integrated into a landscape transformation strategy: “quilting the terrain”.

The transformative strategy of quilting the terrain is executed by the following four strategies:

(1) Preservation of the landscape’s assets

The mosaic landscape pattern and its natural processes are kept basically unchanged: the rock outcroppings and cliffs, the brush and grass cover, the natural drainage system and the fluctuation of river water, the agricultural fields, and the trees lining the river bank are kept intact. The cultural landscape elements including the village trails with the old pavilion and the irrigation ditch with the pump house are treated as cultural heritage elements of the site to be maintained and repaired to preserve the site’s history. These significant natural and cultural landscape features compose a canvas laced with meaning and rich textures, onto which the landscape architect weaved in layers of contextually appropriate design.

(2) “Quilting” productive vegetation into the terrain: While the existing habitats were preserved, productive crops were introduced to cover the abandoned fields. The crops rotate annually according to the season: canola flowers in the spring, sunflowers in the summer and fall, and buckwheat in early winter. Meadows planted with a mixture of flower species also rotate with other productive crops in some areas. Patches of low maintenance perennial chrysanthemum flowers, which can be harvested for Chinese herbal medicine, are grown to enrich the landscape spectrum. Two areas of grassy lawns are designated for camping, athletic fields, kid’s recreation, etc. The diverse pallet of vegetation creates an overall productive and/or low maintenance canvas that encourages dynamic year-round events and celebrations and provides day-to-day use of the park.

（3）Adapting the water processes and water resilience: The pre-existing drainage system on the site was preserved, and additional bio-swales were added to fields and sloped areas to capture and filter stormwater (which can be used for irrigation when needed). Permeable materials were used on all paved surfaces. Concrete embankments were removed so that the river and wetlands were free to fluctuate naturally. A boardwalk was designed to “float” above the river creating an access route that allows visitors to appreciate the red stone cliffs, which would otherwise go unnoticed. The pavilions were built to be flood-friendly.

（4）Framing the terrain and water with a network of paths and structures: Boardwalks, bridges, platforms, pavilions and a viewing tower form a circulation network that provides visitors with a rich set of interactions with the mosaic landscape. The pavilion structures are inspired by the simple shelters dotted in the vernacular landscape that provide lunch and resting space for working farmers in the fields in this subtropical climate. This network, while detached from the “canvas” of the landscape mosaic below it, effectively transforms the productive and “messy” nature by visually framing it into a pleasing array of interactive experiences.

(5) An environmental interpretation system was designed to tell the natural and cultural stories of the site and to raise overall environmental awareness.

The park has been very successful as a place for local residents to relax and recreate. It has become a dynamic urban oasis with celebrations and many kinds of events–like the spontaneous gatherings spawned by social media for locals who follow the seasonal blooming of flowers. These events encourage residents to be aware of the changes of seasons that are often obscured by the hustle of urban life. This connection to nature can refresh the memories of a once rural population (80% of the urban residents, as with the general Chinese urban population, were farmers two or three decades ago). On a fine day, one can be easily moved by scenes throughout the park: kids of various ages jumping and yelling in excitement in one of the pavilions floating above the lush vegetation, young people hugging and falling in love in a fields of flowers, newlyweds having their wedding photographs taken with the productive farmland in the background, couples caring for their babies in strollers above the boardwalk, and elderly couples walking arm-in-arm and resting on the platforms overlooking the new city. As the terrain slopes up from the river, the landscape is quilted with productive and fecund vegetation. Offering respite from the dense urban surroundings, these verdant tableaus are framed by an experiential network of boardwalks and structures that look out onto the memories of the past and hopes and dreams for the future.