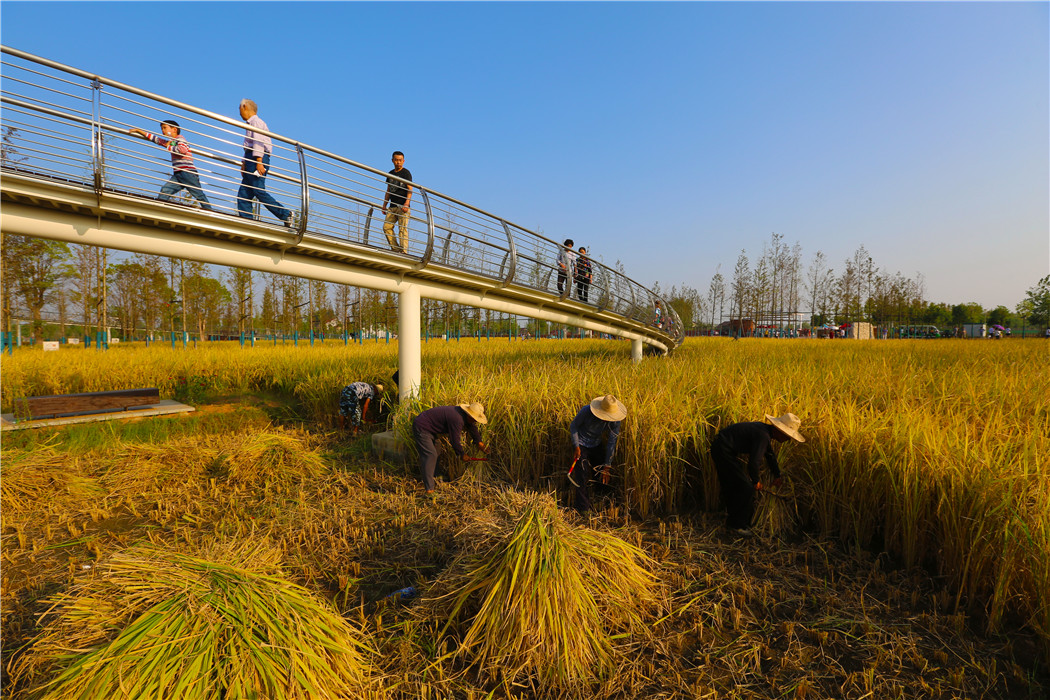 Hidden in a remote and poor rural region for decades, the Chengtoushan Archaeological site was rediscovered through landscape design using performance and production based approaches to landscape. This not only protected the integrity and authenticity of the ancient heritage, but also sees to develop it as a valuable tourist attraction. It showcases how landscape architecture can transform an obscured archeological site into an educational, playful and productive asset which will greatly benefit the local community.

In 1979, Chengtoushan was a mound on the intensively cultivated flood plain of Dongting Lake in Hunan Province of China. At that time, Chengtoushan was accidentally discovered as the site of the earliest city in China, and the place where rice was first found cultivated, and soon after, it was designated as a national heritage site. For the local community, this great discovery was more of a burden on their shoulders than a blessing. Given poverty and remoteness in a rural region, the productive land was taken from their hands and designated as protected land, and they were also given the responsibility to protect this place from been destroyed. After being kept untouched for about three decades, the local government made the decision to turn the burden into a blessing, with the aim to transform this area into a tourism attraction to improve the local economy.

An expensive mistake was made at the beginning of this endeavor. Prior to a landscape architect being called in, the landscape around the archaeological site had already been transformed dramatically from agricultural fields into ornamental gardens. A wide avenue composed of several museums and monumental structures, lined with ornamental trees, and decorated with flower beds and rockeries had been built, as if it were in the urban landscapes seen ubiquitously in China, and a paved square was to be built at the south entrance outside the archeological site. The site began to lose its authenticity, and interest waned from visitors or urban residents from the cities in this region. It is fortunate that such a vast scale decorative landscape project was put on hold when a knowledgeable official at the upper level of government visited the site and made a negative comment. The landscape architect was invited to redesign the project, although for the most part it was too late, save to rescue the situation by a rediscovery of the surrounding landscape. The challenge, however, remained as to how the authenticity and integrity of an archeological site be protected, while concurrently transform the landscape in such a way that the ubiquitous agricultural landscape can become an attraction for tourism to fulfill the objectives of the local community and government.

Three strategies had been taken to protect and transform the landscape of Chengtoushan.

Firstly, the archeological site was maintained with minimal changes, except for a route designed to enable visitors to interpret the environment. The circular city surrounded by a moat becomes an empty and silent theater which creates ample opportunities for visitors to imagine what life may had been like in the ancient city.

A second strategy of ecological recovery through the use of diverse wetland plants and patches of trees was implemented for the land beyond the moat surrounding the circular urban core. The main part of the park outside of the protected core was reclaimed into agricultural fields, and turned into an outdoor museum of rice. Two crops of rice of various cultivars year round are enriched with other native vegetation in the water channels and wetlands which will regulate stormwater and remediate the nutrients leaked from the rice fields. Subtle designed patterns distinguish the rice fields from the normal agricultural fields, in that the parcels are divided into smaller ones and paths are lined with angles that create diverse vistas. The Chinese native redwood trees are planted on the paths, but only on the south-north oriented ones so that not much shadow will be cast over the rice fields, which need maximum sun exposure to grow. The shaded pathways make for comfortable routes for visitors during the hot summer months.

Thirdly, a glass bridge was designed to lift visitors 4 meters above the ground so that the archaeological site to the north can be seen and be photographed. The glass paving panels of the bridge allow sunshine to penetrate so the crops beneath it will not be harmed, and makes for walking along the bridge an enticing adventure. The glass bridge is stabilized and accessed through four ramps at four sides, becoming an attraction for visitors, particularly children and students, which make an otherwise monotonous and boring agricultural landscape exciting and entertaining.

While the archeological site is left in silence to stimulate people’s imagination, the productive fields are an active and ongoing performance: rice planting, weeding and harvesting are all parts of the design that mingle with recreational activities of jogging, picnicking, dog walking, school field trips and family days out. As a viewing platform and immersive pathway, the glass bridge allows urban visitors to witness rice planting and harvesting activities, and to have contact with hard working farmers. Visitors can help out the farmers and join in their farming work. In this landscape, the boundary between the working and performing, production and art, rural and urban, owners and visitors, functionality and aesthetics are all dissolved into an integrated scene of beauty and harmony.

This project took one year to build and it has proven to be a great success.

Unknown in a remote region for decades, the protected archeological site has suddenly heightened awareness, and tourists from nearby cities are attracted to visit the site to learn about their ancient ancestors and the origin of the food they eat every day. Meanwhile, this poor rural region and particularly the neighborhood has gained significant economic benefits through the development of tourism.