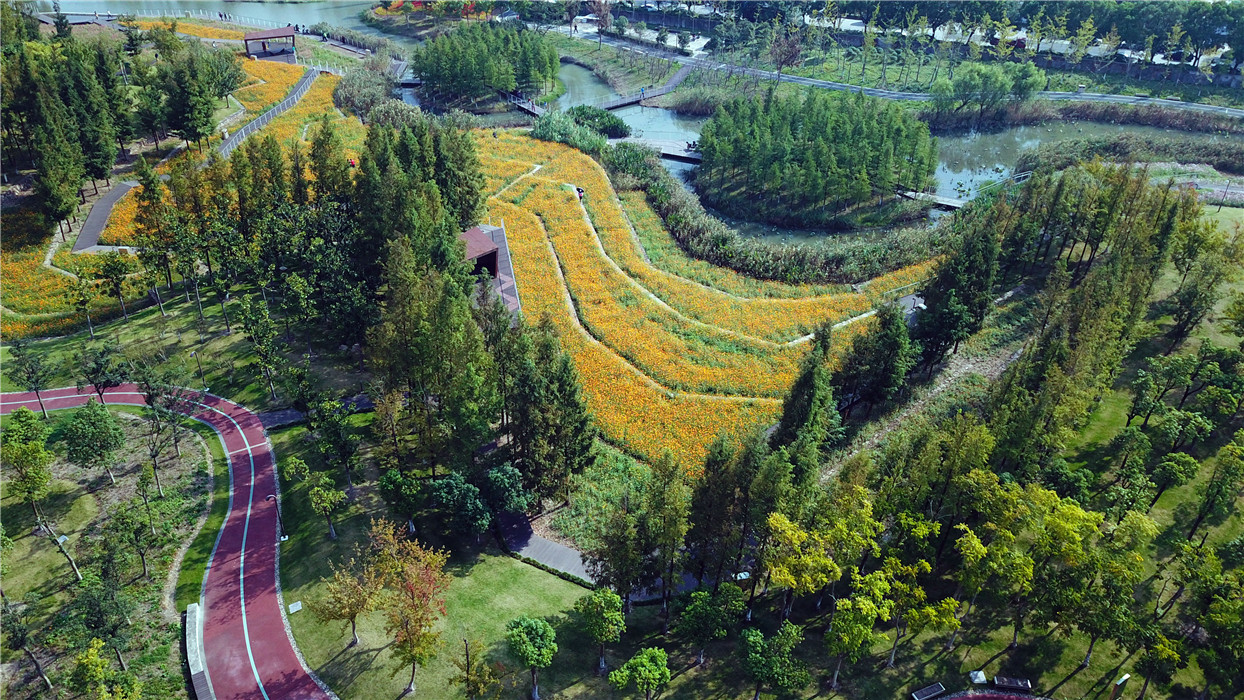 Built upon a typical post-industrial site with degraded ecologies that needs to be healed and would soon become part of a new urbanized district. Holistic ecosystem services oriented, the project introduces terraced wetland to manage elevation change of the site to slow down the flows of urban runoffs from the street down to the river and remove the nutrients. The original channelized river is transformed into a meandering eco-friendly waterway dotted with tree isles to increase the interface between organisms and water bodies to empower the river’s purification capacity. The project uses productive crops and annual flowers that are rotated to bring seasonal surprise and agricultural vitality to the growing city. Boardwalks are designed to allow visitors to have intimate experience of the nature and the nostalgic pastoral landscape. Pavilions made of corten steel floats on wetlands and terraces, giving the ecological corridor a touch of contemporary urban life and art. This project demonstrated landscape as an ecological infrastructure that heal the degraded ecological system meanwhile provided social and cultural services to the establishing communities.

The Ningbo Eastern New Town Ecological Corridor (Zhongshan Road-Railway) is 1286 meters long from north to south and 434 meters wide from east to west, with a total area of 37.4 hectares. The completed section is between Zhongshan Road and Baizhang East Road, with a north-south length of 470 meters and an east-west width of 470 meters, and 12.2 hectares in size.

Located at 29°51′14″N, 121°37′14″E, the site is bounded by Zhongshan Road on the north side, railroads on the south side, Fuqing Road on the west side, and a planning road on the east side. Before being designed, the site and surrounding areas were fragmented farmland, villages and factories that were planned to be relocated. The terrain was quite flat, the water network was densely distributed in the region and seriously polluted by industry and domestic sewage. The river was partially straightened and channelized. Factory buildings, cement paving and stacking materials left by the rural enterprises are distributed on the site. Domestic and industrial waste fills the river channels. This site is a typical brownfield in the rural-urban fringe of the southern region of China.

This is a post-industrial landscape ecological reconstruction project. As part of the larger ecological network in the Ningbo eastern new town, this project aims to build the continuity and integrity of the ecological corridor meanwhile fulfill the needs of the establishing communities surrounding the site. Oriented towards holistic ecosystem services, landscape is designed as a comprehensive ecological infrastructure to solve the urban ecological and environmental problems systematically. The project would restore the hydrologic environment, cleanse water bodies, and rebuild riparian wetlands, meanwhile create a public green space to meet the demand of modern urban life, and to define the identity of the new urban district. The project will bring vitality and sense of place to the city which is under construction, and enhance citizens’ awareness of belonging and community. Meanwhile, the project looks forward to cost savings in the construction and maintenance, which are also the client's demand for ecological, social, cultural and economic considerations.

To meet the above objectives, the project adopts the following four strategies:

Firstly, the current factory buildings in the site are kept and re-used to preserve the site's memory and historical context. The grid structure of the factory building is transformed and interspersed with green planting to form a unique landscape and resting place, making it the landmark of the entire project (this part has not been constructed yet). The existing trees and water system in the site are retained and integrated into the new design.

Terrain design aims to improve the hydro-ecological processes. It slows down the water flow, intercepts and purifies the water body, and makes full use of plants to absorb nutrients from water bodies. Based on the original river, the corridor is ecologically designed to in a curvilinear form. The isles are designed in the water to increase the interface between water and land. With the elevation change of 4 meters between the road and the river’s water level, multi-level terraces are designed to intercept and filter the urban surface runoff before it flows into the river. To strengthen the water purification process, a diversion channel is designed on the west side of the site. The contaminated water from the upper reaches of the river is lifted into the diversion channel from north to south. The channel meanders through the forest, distributing water to each terraced wetland for filtration and purification, before the water is discharged into the river.

Corresponding to the terrain design mentioned above, vegetation design is divided into three types: wetland vegetation, annual crops and meadows, and woods. Low-maintenance aquatic plants and wetland plants are widely used on both sides of the riverbank and in the water. On the side close to the city, arbor belts dominated by broadleaf trees such as Cinnamomum camphora, Ginkgo biloba, and Elaeocarpus decipiens form a green border between the city and the park meanwhile create a penetrable visual connection in between.

On the isles, densely planted Metasequoia and Cyprus groves form a green volum and divide space in the middle of the ecological corridor. The roots of the tree penetrate into water body to absorb nutrients and purify the water.

On the terraces between the wetlands and arbor belts, annul crops and flowers are planted in rotation around the season, such as canola flower in spring, sunflower in summer, and chrysanthemums in autumn. The seasonal rhythm and sense of change are brought about to the city by the changing plants, providing the new generation of urban residents with nostalgia after long time away from farming. Standing out from other stereotyped cities, the urban area has been refreshed by pleasant vitality.

Continuous footpaths and cycling paths run through the north and south, connected with the greenway system of the city. A boardwalk system, connecting the city and going through the wetland, groves and terraces, provides various opportunities for immersive experiences. Several wooden platforms are embedded in wetlands and terraces, or interspersed with trees. The platforms are also combined with pavilions, embellished on the landscape matrix. The pavilions are made of corten steel which is folded. They are both art installations and shelters, luring people to take a rest, to take pictures, and to get together. They become the highlight and viewpoints of the ecological corridor.

Ningbo Ecological Corridor (The third phase, Zhongshan Road-Baizhang East Road) was completed in 2016.The waterway has been ecologically reconstructed with rich native habitats, and functions as a green sponge to be flood resilient and able to cleanse the contaminated water. The seasonal productive landscape and rotating meadows provide the city with surprises and are welcomed by the citizens. Though intensively used by local residents, the high time for the corridor is when the canola flowers, or sunflowers or other flowers are in blossom according to seasons, hundred and thousands of local residents and tourists from far are attracted to the corridor, bringing infinite vitality to the city. As an important part of the overall ecological corridor, the park had won the honor of “Most Beautiful Greenway in Zhejiang Province" in 2019.