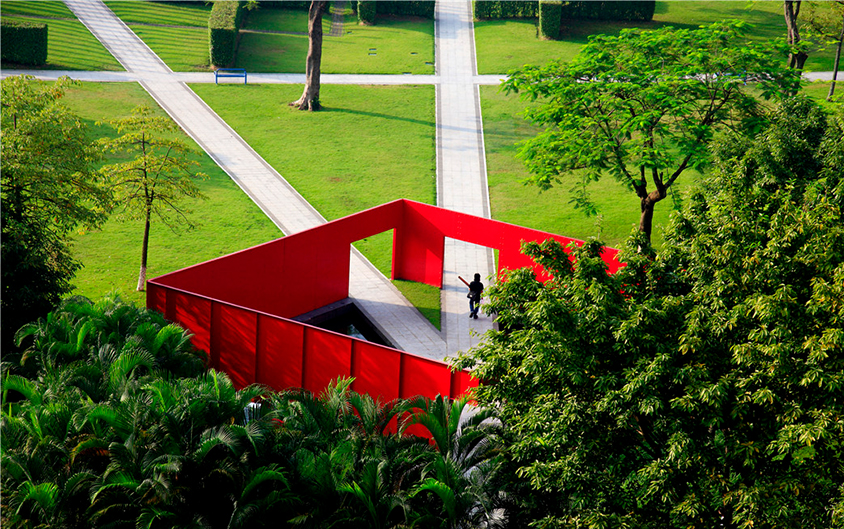 Zhongshan Shipyard Park covers eleven hectares (twenty-seven acres) in Zhongshan in Guangdong Province. It is built on the site of an abandoned shipyard originally constructed in the 1950s, bankrupt in 1999, seemingly insignificant in Chinese history, and therefore likely to be razed to give space for urban development and a grand “Baroque” garden. But the shipyard reflected the remarkable fifty-year history of socialist China, including the Cultural Revolution of the 1960s and ’70s, and recorded the experiences of common people.

The principle of reducing, reusing, and recycling natural and man-made materials is followed. Original vegetation and natural habitats were preserved, just as only native plants were used throughout. Machines, docks, and other industrial structures were recycled for educational, aesthetic, and functional purposes. The design addressed several challenges of the site including accommodating variable water levels and balancing river-width regulations for flood control with protecting old riverbank banyan trees. It helped reuse the remnants of rusty docks and machinery.

Completely different from the classical Chinese scholar gardens, this park, since its inauguration in 2002, has become an attraction to tourists and local residents. It has been used all day and year long, has become a favored site for wedding photographs, and has even been used for fashion show. It demonstrates how landscape architects can create environmentally friendly public places full of cultural and historical meaning but not on sites previously singled out for attention and preservation. It supports the common people and the environmental ethic “Weeds are beautiful.”

A park built on the site of a deserted shipyard. Objectives of the park were the following:

(1)To improve the landscape of the downtown area.

(2)To increase opportunities for recreation.

(3)To provide a site for environmental and historical education.

(4)To become a tourist attraction.

The Philosophy and Design Intent:

Landscape design is the process of preserving and modifying existing forms, and, if necessary, creating new forms to visualize the significance or meaning of a site. These meanings can be functional, cultural, historical or ecological.

It was the intent of the design of this park to therefore express:

1). The functions of a park. A park is an integral part of the urban fabric, not an isolated piece of land enclosed by a boundary for a specific use.

2). Culture and history. The last 30-40 years of cultural change can be perceived as just as significant as the last two thousand years of Chinese history.

3). Nature and its’ beauty. Weeds can be just as beautiful as cultivated roses and peonies.

4). The meaning of design. Through the preserving, modifying or creating of new forms, a park can express the meaning of a design.

The Role of the Landscape Architect: Throughout the process of design and construction of this park, landscape architects played the leading role.

Special Factors: This park was the first park in China to be built based on an industrial theme. In comparison with Richard Hagg’s Gas Works Park in the USA and Peter Latz’s Landscape Park at Duisburg-Nord in Germany, the following aspects of this project make it unique and unusual:

1). Its unique history: “ A small site with big stories”

The shipyard was originally built in the 1950s and went bankrupt in 1999. Though small in scale, it reflects the remarkable 50 year history of socialist China, including the cultural revolution of the 1960s and 70s . It is therefore a space to remember and tell stories to those who did not experience this period of history.

The site inventory of this small former shipyard in South China included an existing lake of fluctuating water levels, existing trees and vegetation, and the wreckages of docks, cranes, rails, water towers and other machinery. These factors challenged the design in three ways:

Challenge 1: fluctuating water levels:. With the existing lake connected through the Qijiang River to the sea, water levels fluctuate up to 1.1 meters daily. To meet this challenge, a network of bridges were constructed at various elevations and integrated with terraced planting beds so that native weeds from the salt march can be grown and visitors can feel the breath of the ocean.

Challenge 2: Balance river width regulations for flood control while protecting old ficus trees along the riverbank. Regulations of the Water Management Bureau required the river corridor at the east side of the site to be expanded from 60 meters to 80 meters to manage water flow. This meant that a series old banyan trees were to be cut down in order to widen the river channel. Our approach was to dig a parallel ditch of 20 meters width on the other side of the trees, leaving them intact as an island of preservation.

Challenge 3: Remnant rust docks and machinery - nothing as gigantic or unusual as a gas works or steel factory. These elements, if left intact because of a pure preservation or ecological restoration ethic, might actually be a distraction or nuisance for local residents. Three approaches are taken to artistically and ecologically dramatize the spirit of the site using these elements: preservation, modification of old forms and creation of new forms. New forms include a network of straight paths, a red box and a green box that dramatize the character of the site in an artistic way.

Significance: This design was presented three times to the public through models and graphics. After construction was finished, it was also shown on national television with the result that local people and people throughout the nation were deeply touched and moved. The design explains itself as to how landscape architects can turn a wrecked site into a beautiful, meaningful and functional place, as well as to the important role landscape architects can play in urban renovation.

Explanation of how the project meets judging criteria by category：

1). Quality of design: From the preservation of vegetation along the old lake shore, the protection of old banyan trees along the river side, the reuse of rails, the decoration of water towers and the placing and reuse of dilapidated machines, to the creation of the red box, all original required elements are carefully designed to fulfill the design intention set forth at project inception.

2). Functionalism: Function reigns supreme in this design. This is evident in the network of paths that link unique locations and exits, the reuse of docks for tea houses and club houses, the accessible terraces planted with native plants, the light tower made from the former water tower, and the paving under trees where shadow boxing can be practiced.

3). Relationship to context: The park merges into the urban fabric through a network of paths and urban facilities that were extended into the park, such as docks that are reused for tea houses (local people customarily drink tea in tea houses). Water elements merge via the inlet from the sea that fluctuates along with ocean tides.

4). Environmental responsibility: The principle of reducing, re-utilizing and recycling natural and man-made materials is well followed in this project. Original vegetation, soil and natural habitats were preserved, just as only native plants were used throughout the park. Machines, docks and other structures were reutilized for educational, aesthetic and functional purposes.

5). Relevance to the profession, the public and the environment：This park is a public place designed by landscape architects that is environmentally friendly, educational, and full of cultural and historical meanings. It calls people to pay attention to culture and history that has not yet been designated as formal or “traditional.” It is about the common man, as well as an environment ethic that states, “Weeds are beautiful.”