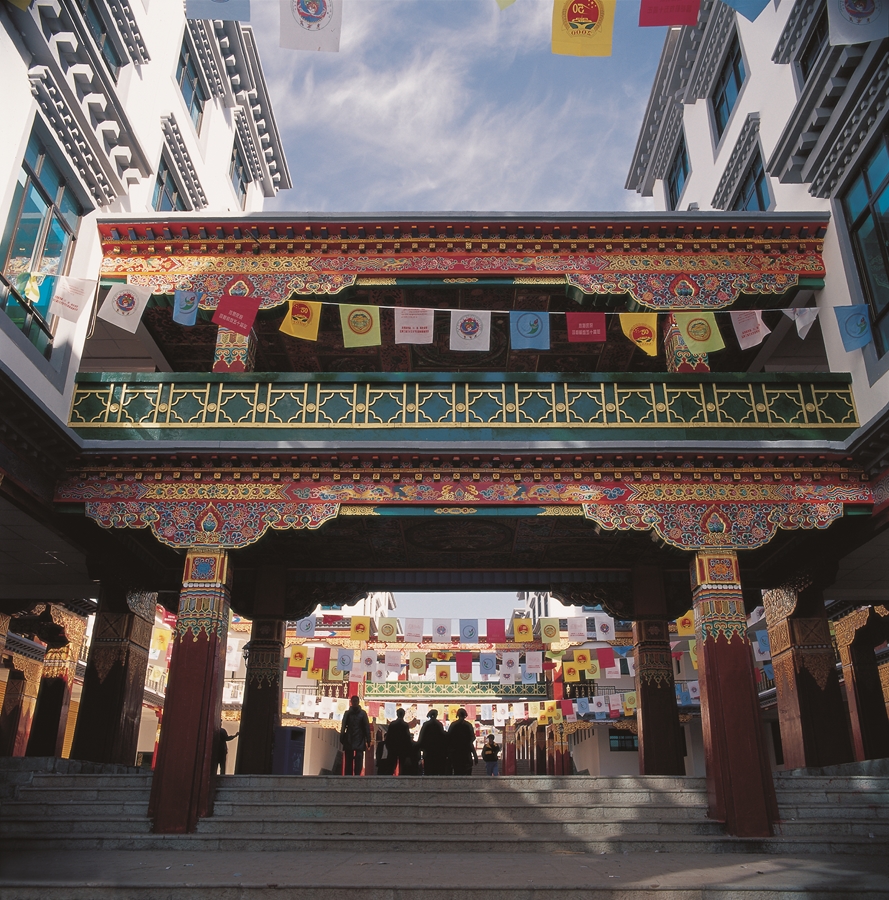 This street is located in a center block of the Changdu city, with a change in elevation of about 10 meters on site. In our design, the concept is to combine folk and religious features with the indigenous water culture, stone culture and planting cultures. Functionally, the design hopes to make this pedestrian street thrive in commercial, residential, tourism capacities.

1 Design with nature, especially the plateau climate and mountainous topography
2 Design with humanism, this means mostly considering the convenience for local people to use this street and also considering the tourist.
3 Design under the respect to the Gods, understand and respect to the local spirit, including the stone culture, water culture, indigenous settlement culture, religious culture and agriculture.

The world of stramonium ------ a whirling and metempsychosis

Stramonium is the most representative feature in Tibet culture, so in our design Stramonium is the basic form of urban space, landscape, architecture arrangement. By a series of Stramonium, we connected the 300m long pedestrian street to a unique one, which could be identified form the large spatial organization to the fountains or small landscape artwork. This form is repeating and to some degree represents the location and national spirit.

Based on the goal of the development and construction of Changqing street, we rejected the original concept of the Urban Comprehensive Plan to build the Changqing street a main road of the city, and instead built it as a pedestrian street.
Porches are frequently used in the design to increasing the commercial atmosphere of pedestrian street. 4 plazas are planned for resting at the North and South termination points, as well as the turning point of the street. The pedestrian street connects with the outside traffic system through 6 horizontal passages.
Barrier free design is considered in this planning, as each terrace or stair has a convenient slope for the wheelchairs or cart to pass..

Except for the post office and the constructed Changdu Shopping center (northern part), the other 9 buildings are all commercial and residential mixed-use buildings.
The Z1 to Z4 buildings are divided into 6 or 4 unique blocks, with each block from bottom to the top composed of independent units. Residential traffic and commercial traffic are independently planned, and have little interference.
The 2nd floor between S1 and S2 building are connected by the overpasses at both the north and south end of the plaza, which create interesting vertical commercial spaces. Finally, 2 landscape pai-loos are designed at the north and south entrances, which are used as landmarks.

The landscape environmental space of the pedestrian street is composed of the public plaza at the west side of the county government office building and the 4 small plazas along the street, and also includes the streets that connect the plazas mentioned above. The basic elements are waterscape, vegetation, pavement, and landscape art. The spatial form of the plaza is enclosed by the surrounding buildings, like the form of Stramonium. This concept is mainly based on the religious concept of metempsychosis which is very popular in the Tibetan culture.
Comment(2) Share