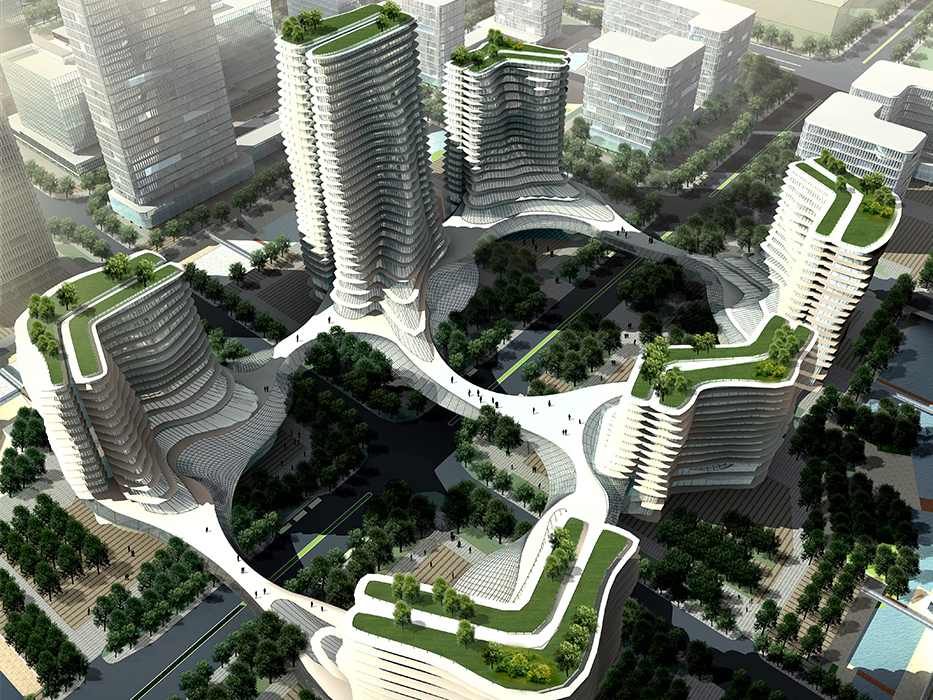 Changping District locates in the north of downtown Beijing. The new eastern CBD District of Beijing is sited in center of Changping New District, which will be a new high light of the sustainable recreation and business services industry in the future, which will also promote the district’s functions and the urban environment. The design embodies five features as the following:
Feature 1: Green transportation network. The overall layout forms a green transportation and recreation network, a variety of green corridors, with integrated walking and biking systems.

Feature 2: The peninsula-shaped core area. Along the north, west and south sides of the core region are designed to form a smooth depressed "Green Valley", that is continuous public open space closely connected with the surrounding business, entertainment, dining and shopping areas.

Feature 3: Waterfront "Urban balcony". The design creates a continuous waterfront landscape corridor and "urban balcony" through topography design. Part of the linear "Urban Balcony" is connected to the square, green space, building, which is a perfect environment for public recreational activity.

Feature 4: Courtyard style layout. In each block the building layout adopted the courtyard style layout, the courtyards are not designed as enclosed space, but with various open areas, so the open and enclosed spaces bring contrast to each other. The urban landscape gained a united effect while maintaining diverse visual effects.
Feature 5: The magnificent "City Gallery." Between the Nan Feng Road and the buildings near waterfront there is a continuous, three-dimensional, colorful walking corridor, which functions to connect the waterfront buildings. Through the frames on the corridor, the cityscape will become a continuous landscape painting of the "City Gallery."
Comment(4) Share