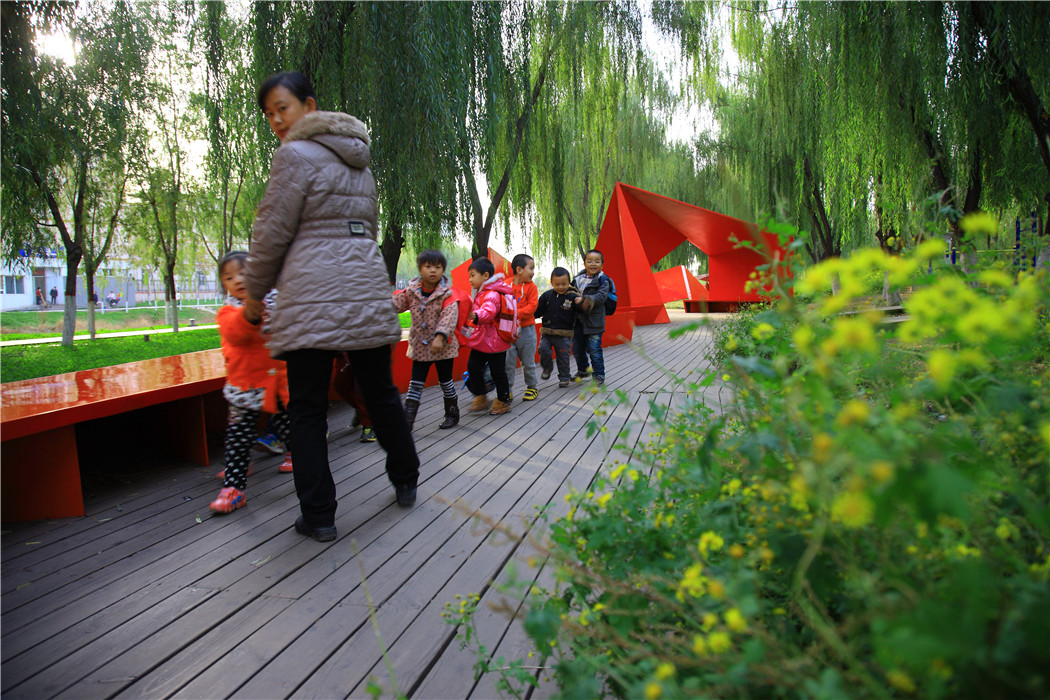 
Located in Qian’an City, Hebei Province, the Sanlihe River uses landscape to revive and construct both existing and new city infrastructure; it is capable of reducing pollution, providing opportunity for urban land development, and serving ecological functions Covering approximately 135 hectares, this ecological corridor stretches 13.4 km in length and varies 100-300m in width. Within this linear park, water is diverted from the Luan River, through the city, before returning to Luan River. Through two years of design and construction, this project has transformed this seriously polluted landscape back to its previous splendor as a scenic urban ecological corridor “where reeds and locus flourish and water abundant with fish and soft-shelled turtles”.  Qian'an City is located at the south foot of the Yanshan Mountain, at the bank of Luan River, northeast of Hebei Province. Although the main city lies near Luan River in the east, one cannot see the water as Qian’an’s topography is situated below the riverbed with its high embankment blocking its view to the river. As the life source of Qian’an, Sanlihe River has shouldered the long history of the city and carried the memories of its common people. Before 1970s,the river bed was covered with pebbles and springs bubble with crystal clear water from the groundwater recharge of Luan River, which ensures the temperature stays cool in summer and warm enough to never ice up in winter. Although visited by storms and heavy rain, Sanlihe River had never experienced disasters of drought and flood in its history, which provides rich water resources for nearby industries and agriculture. In 1913, Li Xianting (a local merchant) set the first semi-mechanized paper mill of Qian'an in Sanlihe River, the first of its kind in Northern-China. In 1917, its first water-powered mill was built and by 1920, eight mills were put into use along the river. Such primitive water-powered mills continued to work until they were replaced by electricity-powered ones in the mid-1960s along Sanlihe River. By 1970s, the river has become badly polluted by sewage and waste products resulted from the continuous industrial development and urban population growth. With the depletion of regional water sources, Luan River’s water quality declined drastically and Sanlihe River became dried up with its channel blocked by waste. The life source of the city became festered with sores of the urban body, and the hearts of local residents aches for its conditions.  Thus, the municipal government decided to commission the Sanlihe River Ecological Corridor Project to change the situation of Sanlihe River and its surroundings completely. Turenscape was asked to design all the work of sewage cutting(replacing sewage pipes that had previously discharged directly into the river with a passive natural infiltration system), and ecological reconstruction. This project is divided into three sections: the water source located upstream, the city section in the middle, and the wetland park downstream. Through two years of continuous construction from April 2007 to early 2010, the upper two sections have been completed while the wetland section downstream is still under construction. Once again, this northern “Steel city” is rejuvenated to be a scenic place where "reeds flourish, trees shade, and birds inhabitat".  The design for the ecological corridor takes full advantage of the existing natural elevation change and of the water channels from the Luan River created by the embankment cut into the city. This project has drastically improved the ecological condition of the waterway as it makes its way through the city.  It is able to regulate the uncertain fluctuations in the water level. At the forefront of the strategy is the creation of bead-like wetlands which regulate floods by collecting and disseminating urban storm water runoff. When the river’s water level drops to its lowest point, pools of water remain in the bead as wetlands, creating a “Green River.” Furthermore, these wetlands work as an ecological purification agent for the water in the river which makes the river a useable source of grey water. The creation of these meandering natural waterways at various surface levels becomes a diverse habitat for wildlife.  The existing trees on the site were saved and the riverbanks were transformed into a number of tree islands connected by boardwalks. The project used low-maintained native vegetation, lush water-grasses, and wild flowers.  Along the greenbelt are the pedestrian and bicycle routes fully accessible to communities along the channel; these routes integrate with the urban slow-transportation network and creates harmony between man and nature in the city of a new era.