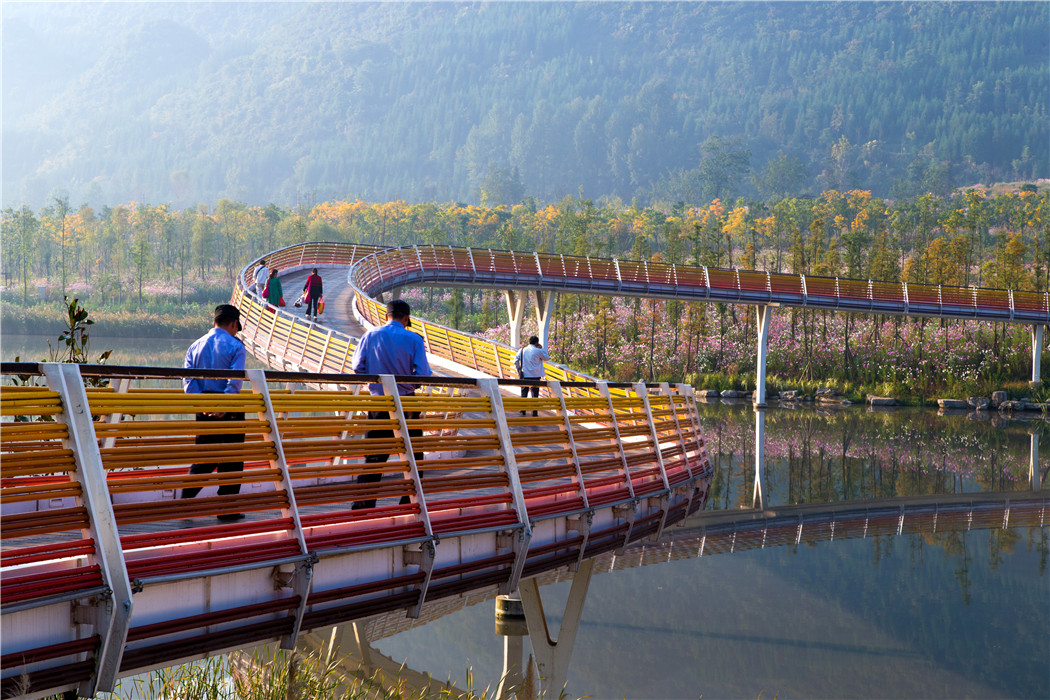 The project is situated in Liupanshui City, along the Shuicheng River. The scope of the task includes ecological restoration of the river, the upgrading of urban open space system, as well as increasing the value of urban waterfront land. The landscape along the Shuicheng River is therefore recovered as an ecological infrastructure providing ecological services to the region. After nearly three years of project phase one design and construction, the once highly polluted and channelized waterway of Liupanshui City has been transformed back into the lifeline of the city through the use of vegetation and natural embankments.  Liupanshui is located in the west part of Guizhou Province, on the Yungui Plateau. Shuicheng River begins in the mountainous Zhongshan District and flows towards Sancha River. 13 kilometers of the river, which flows across the city, is the only channel into which the surface water is discharge in the Shuicheng Basin. As the Mother River of Liupanshui City, it witnesses how the city has been transformed during past few decades and carried a collective memory of the inhabitants. The city was historically surrounding by the river, and named as Shuicheng (Water City), or Lotus Leave City. The city looked like a floating lotus leave in the rainy season because the river rose and surrounded it. Since the agrarian age, Shuicheng River had naturally meandered across the city. Then in 1966, together with the establishment of Industrial Construction Headquarters in Liupanshui, large-scale industrialization, urbanization and mobilization began in the region. The Shuicheng River Reconstruction project, which started in 1975 and completed in 1980, completely changed the river into a straightened and channelized one with concrete embankment. Resulted from the region’s continuous industrial development and urban population growth, the channelized river no longer has the capacity for flood control or self-purification through ecological processes, which leads to the continuing degradation or Shuicheng River. Badly polluted by sewage and waste, the Mother River lost its charm.  In 2009, Turenscape was commissioned by the Liupanshui Municipal Government to working on the planning and design of the ecological security patterns and ecological infrastructure, and the ecological restoration and landscape renovation of Shuicheng River. Utilizing landscape approaches at both macro and micro scales, the designers have been able to revitalize and upgrade the ecological, recreational and social value of the Mother River.  At the macro scale, Turenscape focuses on both the Shuicheng River drainage basin and the city. Firstly, existing streams, fishponds and low-lying land are all integrated into the flood control and ecological purification system along the river, forming a series of purification wetlands with different capacities. This approach not only helps with urban flood regulating but also the river water recharging. Secondly, concrete embankment of the channelized river was removed. Natural riverbank was brought back to revitalize the riparian ecology and maximize its self-purification capacity. Thirdly, the creation of the continuous pedestrian and bicycle paths helps to integrate the urban recreational and ecological space, increasing the accessibility of the riverfront. Lastly, the project combines waterfront development and river restoration together. Ecological infrastructure catalyzes the urban renewal of Liupanshui City, significantly increases the land value and enhances the urban vitality.  At the micro scale, the design approach focused on each specific sections of the river according to the general goal of the master plan. Phase one of this project covers an area of 31.2 hectares, which includes ecological restoration of the channelized river, as well as the creation of Minghu Wetland Park. The designers took advantage of the 15 to 20-meter wide greenway and the elevation change along the river, creating a terraced riverfront landscape, realized the ecological restoration. In terms of the design of the wetland park, the designer utilized the topographical feature on site as well as the existing fishponds system, creating a terraced wetland system for water purification, especially collecting, controlling as well as purifying the streams coming down the mountainous area. Moreover, across the wetland, a pedestrian bridge named “Steel Rainbow” was created as a landmark to manifest the city’s long history as an important industrial base for coal and steel production in southwest China. Lastly, the design advocates the beauty of weeds and low carbon landscape. Native species, which requires low maintenance, are extensively used on site. With beautiful wildflower field and the revitalized Mother River of Liupanshui City, the project exemplified how to harmonize the relationship between human and nature in a new era.
Comment(2) Share